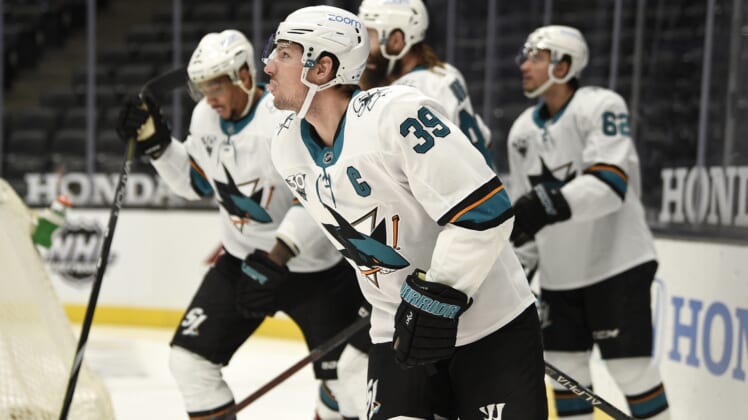 The San Jose Sharks have already shown there’s no quit in their game this season.

After staging two third-period comebacks in the past three games, the Sharks will try to close out their 12-game road trip to start the season on another positive note when they play the Los Angeles Kings on Thursday night.

San Jose trailed 3-1 at the start of the third period on Friday against the Anaheim Ducks before winning 5-4 in a shootout.

The Sharks fell behind 3-2 midway through the third period on Tuesday against the Kings before tying the score with 45 seconds left and eventually winning another shootout.

“That’s the thing I’m most proud of so far,” Sharks forward Logan Couture said. “We’ve put ourselves in tough positions, whether it’s 3-1 down to the Ducks and coming back, or (Tuesday) night, where we give up one and find a way to score. Definitely proud of the way we’ve fought to the end in most, if not all these games.”

They’ve been weakened by injuries and COVID-19, and are monitoring a potential hand injury to defenseman Drew Doughty that occurred late in Tuesday’s loss, but they’re getting solid contributions from other veterans.

Dustin Brown had two goals and an assist on Tuesday. The 36-year-old right wing is tied for the NHL lead with five power-play goals.

Anze Kopitar, who has teamed with Brown the past 15 seasons in Los Angeles, also scored on Tuesday and leads the Kings with 15 points (three goals, 12 assists).

“I expect a lot from the veteran players right now, they’ve got to guide the youth through some rocky roads,” Kings coach Todd McLellan said. “Obviously, we are like every other team, we’re dealing with injuries, we’re dealing with COVID issues, they have to come to the rink every day and set the tone. Their professionalism is very important.”

The Kings may have no choice but to rely on their young defensemen if Doughty is out for any length of time.

The Sharks have been pleased with the play of Couture, who has a goal in three straight games and also scored in the shootout on Tuesday.

“(Couture) has dealt with a lot with training camp, being our NHLPA rep, and the play on the ice,” San Jose coach Bob Boughner said. “He’s handling it unbelievably. He’s a guy who just shows up to play the right way every night. Playing against the other team’s best players most times. He’s a lot more vocal (this year). He’s evolving into a great captain.”