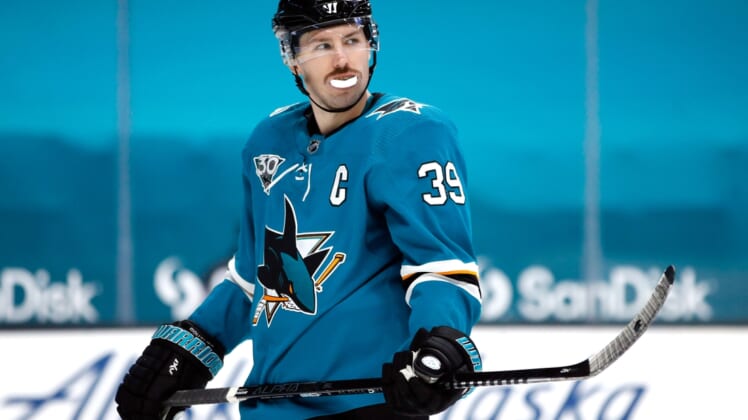 The San Jose Sharks hope to translate their recent progress into victories when they host the St. Louis Blues on Friday.

“I take some great things out of both games,” Boughner said after the Sharks blew a 3-1 lead over the Golden Knights on Wednesday in their 5-4 defeat. “We’re trending in the right direction, but this really stings right now.”

The Sharks were in control of Wednesday’s game until they suffered a penalty for too many men on the ice. That opened the door for the Golden Knights to score four straight goals in the third period.

“Moral victories suck, but yeah, we played better,” Sharks captain Logan Couture said. “Should’ve won tonight. Gave away points. Sucks to have to take away moral victories when you need to win. (We) should have won and were in a position to win in the third period.”

Now the Sharks will face the slumping Blues in back-to-back games in San Jose.

The Blues have lost five straight games, although three of the defeats came in overtime. After starting the season 7-2-1, the injury-riddled Blues have gone 7-8-4.

Slow starts in the first period has been a recurring problem for St. Louis. Opponents have scored first in 18 of 29 games this year.

The Blues have been outscored 6-0 in the first period of their past three games. They fell behind the Los Angeles Kings 3-0 on Wednesday night and ended up losing 4-1.

“It was very slow,” Blues captain Ryan O’Reilly said. “We just didn’t start with the urgency we needed. We weren’t quick enough. We weren’t physical in the D-zone. Just weren’t sharp to go, and that’s what killed us.”

This season series has been tight, with the Blues and Sharks each winning three times. Each team won once in overtime, and the Sharks won once in a shootout.

The Blues are getting closer to full strength. Forward Tyler Bozak returned Wednesday after being sidelined with a concussion, and forward Jaden Schwartz is expected back Friday from his unspecified lower-body injury.

“We’re looking to make up more ground,” Blues winger David Perron said. “That’s how I see things. You wanna get those (injured) guys back, but you want them to get comfortable, you want them to play their game. And then you want to take another level probably as a team in many ways.”

The Blues are still missing cornerstone defenseman Colton Parayko (back) and key forwards Robert Thomas (thumb) and Ivan Barbashev (ankle) due to injuries. Defenseman Carl Gunnarsson is out for the season with a knee injury.

The Sharks have received better goaltending this month. Devan Dubnyk has a .918 save percentage and a 2.68 goals-against average in March while displacing Martin Jones as the No. 1 netminder.

Conversely, No. 1 Blues goaltender Jordan Binnington has struggled this month with a 3.48 GAA and an .889 save percentage. He was pulled from his last start against the Sharks, a 7-6 comeback victory on Feb. 27.