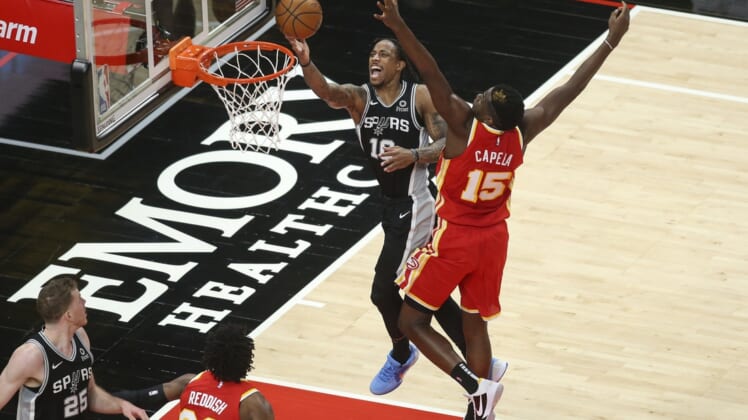 The San Antonio Spurs look to remain undefeated against teams from the Eastern Conference when they roll into Charlotte to face the surging Hornets on Sunday.

San Antonio heads into Charlotte for the only time this season after a rousing 125-114 win in Atlanta on Friday. Seven Spurs scored in double figure even though no one played more than 28 minutes.

The Spurs, who improved to 4-0 against teams from the East, put together their best half of basketball, and best three quarters, as they rolled by the Hawks to open a seven-game road trip.

“It’s good to get that first win under our belt, and just continue playing,” Spurs guard Derrick White said. “This is a huge seven games. It was a good start for us.”

“We knew they had a lot of fire power on offense, a lot of good shooters that can get going,” San Antonio center Jakob Poeltl said. “So we really tried to be aggressive, get into them from the jump, play smart, play without fouling.”

After scoring the first two baskets in the fourth to go up by 42, the Spurs sleepwalked to the finish, drawing the ire of coach Gregg Popovich. The Hawks outscored San Antonio 42-15 in the final quarter.

“The fourth period was an embarrassment,” Popovich said.

Overall, the Spurs shot 52.9 percent from the floor, 38.7 percent from beyond the arc and registered 27 assists in the win.

The Hornets will play the second game of a five-game homestand that started with a 120-114 win on Friday against hapless the Minnesota Timberwolves behind Terry Rozier’s 41 points.

“Terry deserves a ton of credit for this victory, and he was great down the stretch,” Charlotte coach James Borrego said. “Overall, he kept us going. Even off the floor, he’s showing his leadership and his will to win games.”

LaMelo Ball scored 20 points and 11 rebounds for the Hornets, who’ve won three of their past four games. Cody Zeller added 17 points on 7-for-8 shooting for Charlotte in Friday’s win. Gordon Hayward scored 14 points and Miles Bridges contributed 11 points and 10 rebounds.

The Hornets won even with Caleb Martin, Cody Martin and P.J. Washington out because of health and safety protocols. The team didn’t even get the go-ahead to play Friday’s game until less than two hours before tipoff.

“We had every excuse in the world not to win this game, but we just found a way — that’s the bottom line,” Borrego said. “Our guys stuck with it and figured out a way to get it done.”

San Antonio swept the season series for the 11th time in the last 15 campaigns in 2019-20 and owns a 21-9 all-time record in games played in the Queen City.