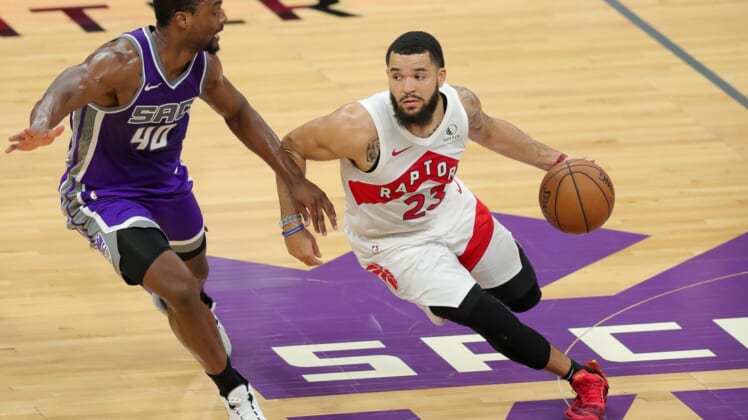 The visiting Sacramento Kings have lost their past seven games against the Toronto Raptors and they will try to change that Friday night in Tampa.

The Raptors already have a win over the Kings this season, 144-123, on Jan. 8 at Sacramento with Fred VanVleet scoring 34 points.

The Kings last defeated the Raptors on Nov. 20, 2016. They are coming into Friday having won two in a row while the Raptors have lost their past two.

Sacramento will have the more rested team. After defeating the New York Knicks on Friday, their next two games were postponed because the Memphis Grizzlies have had COVID-19 issues.

The Kings then defeated the host Orlando Magic 121-107 on Wednesday while the Raptors lost to the visiting Milwaukee Bucks 115-108.

Before beating the Knicks at home, the Kings had lost six of seven that included poor defensive efforts in allowing 144 points to Toronto, 132 to the Portland Trail Blazers, 138 to the Los Angeles Clippers and 128 to the New Orleans Pelicans.

“I believe our guys are getting better,” Kings coach Luke Walton said after the win at Orlando that opened a four-game road trip. “It was a nice way to start the trip. Our defense looks a lot better.”

The Kings had held their opponents to fewer than 30 points for eight consecutive quarters before allowing 30 to the Magic in the fourth quarter on Wednesday with the game in hand.

“When you put the work in, players like to see the results,” Walton said. “Holding teams under 30 for a quarter, then another, then another. … The way we were playing defense (before), we weren’t going to win a lot of games.”

Buddy Hield, who scored a season-best 29 points on Wednesday, said the four-day break from playing games helped. “I think it’s practice,” he said. “It really helped.”

The Kings had Hassan Whiteside back in the lineup Wednesday after he had missed four games with a hip injury and he had nine points and six rebounds in 16 minutes.

The Raptors had Pascal Siakam back in their lineup Wednesday after he had missed two games with left knee swelling. Siakam had 11 points and nine rebounds in 35 minutes. They were without OG Anunoby (left calf strain).

Raptors coach Nick Nurse said Thursday that Anunoby was doing better but a decision would not likely be made until Friday.

“He’s had a heck of a career,” Nurse said. “This is another landmark in a number of things. The six All-Stars, the gold medal (with) Team USA, the (NBA) championship, obviously. I think he’s made himself into a heck of a player, and I think the scoring is the part of it he’s worked on, the shooting.”

As for the effort against the Bucks, Nurse said: “I thought we played well enough at the defensive end to give ourselves a chance. I think we did get a lot of good shots, but I do think we had just a couple of little stretches where I would have liked to have seen us continue to work and probably end up with that same shot or something better.”