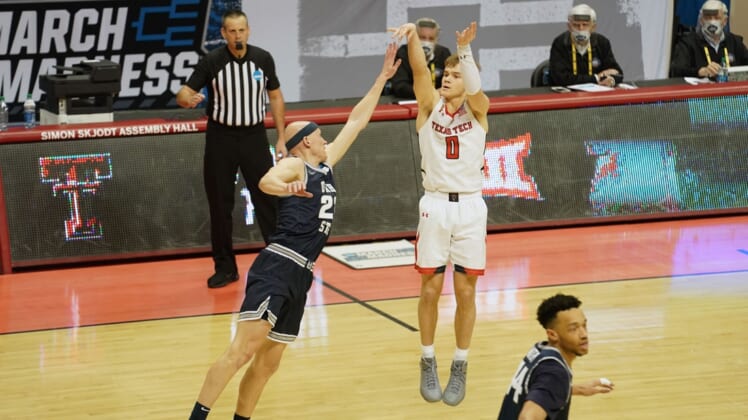 Arkansas and Texas Tech had to overcome pesky lower seeds in the first round of the NCAA Tournament.

Both finished strong Friday to advance to a Sunday second-round meeting in the South Region.

Other than that, these two teams are diametric opposites in terms of style and approach. Texas Tech brings a constricting defense and general old-school approach. Arkansas is fast, feisty and has enough flash to bring a wow factor to Indianapolis with a Sweet 16 spot on the line.

The third-seeded Razorbacks (23-6) trailed 14th-seeded Colgate by 14 points in the first half, but they pulled away for an easy, 85-68 victory.

“I thought maybe our inexperience in the tournament showed the first 10 minutes of the game,” Arkansas coach Eric Musselman said. “Then I thought we got settled in.”

Even though a 17-0 run to close the first half gave Arkansas a three-point halftime lead, it had to overcome another Colgate push as it fell behind by six points during the second half. But a 10-0 run gave the Razorbacks control.

“That momentum we had from the last four minutes of the first half really carried us through the rest of the game,” said Justin Smith, who led Arkansas with a career-high 29 points, 13 rebounds and five steals.

Arkansas forced 22 turnovers and held the Raiders to 19 fewer points than their average.

“I thought our defense was incredible,” Musselman said. “I thought we did a great job of closing the game out.”

Offense is what makes Arkansas go. The Razorbacks averaged 82.4 points per game this season.

Musselman moved Smith from forward to center for much of the game as he utilized a small, quick lineup.

JD Notae came off the bench to score all 14 of his points in the second half on Friday.

“He always finds a way to make a big shot because he’s fearless,” Smith said of Notae.

The sixth-seeded Red Raiders (18-10) trailed 11th-seeded Utah State by three points at halftime, but used a strong second half to win 65-53 in Bloomington, Ind.

Like Arkansas, they used a pair of significant runs to take control. Terrence Shannon Jr. scored eight of his 10 points during a 13-0 run early in the second half that produced a 38-31 lead. They used a 9-2 run to extend the lead to 58-43.

“It’s a game of runs in March,” said Kevin McCullar, who had 10 points and seven rebounds for Texas Tech. “We had to make some adjustments at halftime. We were trying to be more aggressive on defense.

The Red Raiders, like the Razorbacks, forced 22 turnovers by their opponent.

“The ability to turn them over and create some offense from our defense really was probably the difference in the game,” Texas Tech coach Chris Beard said.

Mac McClung scored 16 points and Kyler Edwards added 12 for the Red Raiders, who can reach a third consecutive Sweet 16 with a win over Arkansas. They reached the title game before losing to Virginia in 2019.

“We told our guys to play fearless, to play with courage and to let it rip,” Beard said. “That’s our theme this year — we’re here, let it rip. We think we can win six games in this tournament.”