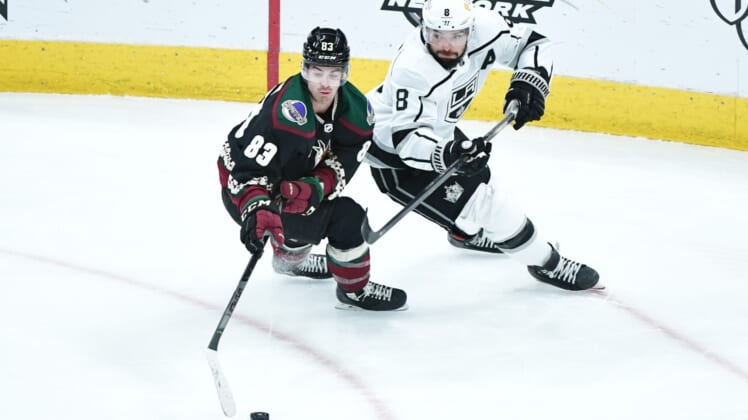 The Los Angeles Kings will try to extend their winning streak to four games when they play the host Arizona Coyotes on Saturday in Glendale, Ariz.

The Kings beat the Coyotes 3-2 in a shootout on Thursday night, which gave them points in four straight games (3-0-1).

Los Angeles, short-handed early in the season due to injuries and COVID-19 protocols, has seen a significant impact from returning players.

Kings defenseman Matt Roy is among those who have made a difference since rejoining the lineup. He missed five games with a facial injury and the Kings went 1-3-1 in those games.

Roy returned Tuesday in a 4-0 win against the visiting Minnesota Wild and has been second in ice time behind fellow defenseman Drew Doughty in both games.

“Matt Roy just makes a huge difference back there,” Kings coach Todd McLellan said. “Not that the group that we had in (the lineup) throughout the injuries wasn’t capable, but he just stabilizes things so much back there, makes us a little bit deeper.”

The Coyotes are looking to rediscover their offense after scoring two goals or fewer in three of the past four games. Arizona coach Rick Tocchet would like to see the Coyotes simplify things in the offensive end.

“We have to start getting delivered pucks to the net,” he said. “These ugly games have ugly goals.”

A prime example was the first goal for Arizona on Thursday, when Conor Garland’s shot from the high slot deflected off the stick of Los Angeles forward Alex Iafallo as he battled with Nick Schmaltz in front of Kings goaltender Jonathan Quick.

Tocchet said the Coyotes can start by doing a better job getting through the neutral zone, where the Kings stifled Arizona for most of the game on Thursday.

“They did a great job (Thursday) night in the neutral zone,” Tocchet said of the Kings. “We started getting the pucks in deep and got a few bounces our way. That’s the type of goals we have to get in ugly games.

“During these types of games in the season you’re going to have to be patient and play ugly. It’s just the way it is. There’s not much in the neutral zone, so you have to go chase it and win a battle. That’s the way it works sometimes.”

McLellan is aware that dominating the neutral zone is key against the Coyotes. Arizona’s strength is sustaining a forecheck and keeping possession of the puck in the offensive zone for long stretches.

“They’re going to play in your end at some point,” McLellan said. “We’re going to have breakdowns, that’s what we have goaltenders for, and Quickie made some real good saves when we needed them (on Thursday).

“For the most part, I thought it was the type of game our team needs to play to win, and that’s a good sign that we understand that.”