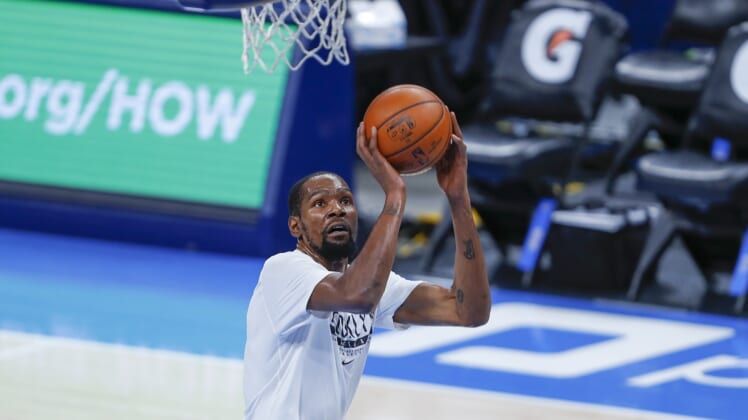 The Brooklyn Nets rested Kevin Durant Friday and were still good enough to match a franchise record for points scored in a regulation game.

Brooklyn hopes to keep the productive offense going and extend its winning streak to a season-high five games Sunday night when it visits the Washington Wizards.

The Nets are on their second four-game winning streak of the season after getting a 147-125 win at Oklahoma City when Durant was rested. Brooklyn also won four straight Jan. 12-18 before dropping consecutive games in Cleveland. They are averaging 126.2 points during this streak.

Friday’s win matched the record for most points in a regulation game that was set in a 147-132 win at Detroit on April 17, 1982, and the offensive output was achieved without anyone scoring more than 25 points. Kyrie Irving totaled 25 points and seven assists while James Harden had 25 points, 11 assists and 10 rebounds for his third triple-double since joining Brooklyn in a blockbuster trade from Houston on Jan. 14.

“They were both incredible,” Nets coach Steve Nash said. “James manages the game so well, spreads the floor, scores, assists, rebounds, gets his hands on balls defensively. Kyrie was just incredible shotmaking. He’s able to make amazing plays with the basketball and it’s such a threat out there.”

Durant is returning after scoring 32 points in 42 minutes in Wednesday’s 132-128 overtime win in Atlanta. He is averaging 30.5 points and has scored at least 30 points in seven of his past nine games since missing a potential game-winning shot in Brooklyn’s 123-122 home loss to Washington on Jan. 3.

“He’s played a lot of minutes, played an overtime game and it was a decision to protect him tonight,” Nash said.

Washington has dropped seven of eight since Thomas Bryant’s game-winning dunk beat Brooklyn in the first meeting. Bryant was lost for the season with a torn ACL a week after his dunk. and the Wizards had six games postponed due to COVID-19 protocols.

Since returning from a nearly two-week absence, the Wizards have dropped four straight, losing those games by an average of 18.25 points. The Wizards returned home from a three-game road trip Friday and shot a season-low 36.5 percent in a 116-100 loss to the Atlanta Hawks in a game that saw the Wizards pile up six technical fouls and the ejections of Russell Westbrook in the fourth quarter and Robin Lopez in the third.

“We’re not going to give up,” Wizards coach Scott Brooks said. “We’re going to keep fighting and we will turn it around. And when we do turn it around, it’s going to be a great feeling to say that we turned around a very unique, a first time (situation) that hopefully never happens again.”

Bradley Beal scored a season-low 26 points Friday after getting 47 Wednesday in New Orleans. He is averaging 36.7 points in his past nine games, a stretch that includes a 60-point game in Philadelphia on Jan. 6. Beal has scored at least 26 points in each of his 14 games this season and scored at least 20 in his past 37 games dating to last season.

“We understand that nobody’s going to feel sorry for us,” Beal said. “We don’t want that. We’ve gotta dig ourselves out of this hole.”

The Wizards are gradually getting players back from health and safety protocols. Rui Hachimura, Davis Bertans and Moritz Wagner were a combined 3-of-16 from the field in their returns on Friday, and Brooks said rookie Deni Avdija, Troy Brown Jr. and Ish Smith are expected to play Sunday.