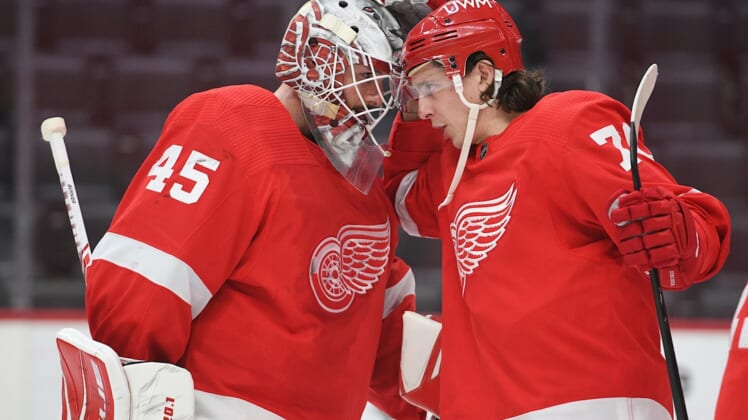 Just when the Detroit Red Wings started to show some real progress, they have concerns about their top goaltender.

Jonathan Bernier was injured late in the second period of their 3-2 win over Dallas on Thursday. The two Central Division teams will meet again in Detroit on Saturday.

Dallas’ Denis Gurianov and Detroit’s Patrik Nemeth fell on Bernier as he reached for the puck just outside the goal crease. He needed assistance to leave the ice.

“It’s never good when you see anyone on your team go down,” Red Wings forward Robby Fabbri said. “We weren’t real sure what it was at the time. We’re hoping it’s not too serious and he can come back as soon as possible.”

Bernier’s last four appearances have included wins over Tampa Bay, Carolina and Dallas and the other was a 2-1 loss to the Hurricanes. He’s 8-6-0 with a 2.78 goals-against average and .918 save percentage despite the Red Wings’ last-place status.

Detroit struggled without Bernier when he was sidelined for two weeks earlier this season. The Red Wings’ backup goaltender, Thomas Greiss, is 2-11-4 with a 3.46 GAA and .883 save percentage.

Greiss will likely start on Saturday and as long as Bernier is out. The Wings were up 2-0 when Greiss replaced Bernier in Thursday’s contest.

“It’s a tough situation to go into,” coach Jeff Blashill said. “Our guys wanted to get him through that game, and ultimately he (Greiss) recorded the win. He’s a guy our guys like a lot and he came in and did a great job.”

Fabbri was the star of the game, recording his second career trick. He scored in each period and now leads the Red Wings with nine goals despite missing nine games due to the NHL’s health and safety protocols.

Fabbri is skating on the first line with center Dylan Larkin and wing Anthony Mantha.

“We’re really close off the ice and we’re trying to convert that on the ice,” Fabbri said. “It just starts with work ethic and being predictable to each other, and that comes with playing games together and getting used to each other.”

The Stars lamented coming away with no points on Thursday despite a 40-21 shots-on-goal advantage.

“We forced a lot of mistakes on their part and we didn’t score. We made a couple that ended up in the back of our net,” coach Rick Bowness said. “It’s frustrating when you put 40 shots on net and you only get two goals.”

Dallas won its first four games, including two against the Red Wings, but have gone 5-10-7 since that quick start.

The Stars’ last four games have been decided by one goal. The other three besides Thursday’s game required overtime or shootouts to determine the outcome.

“How we’re playing as a team is not the issue,” Bowness said. “The issue is getting that puck in the net.”