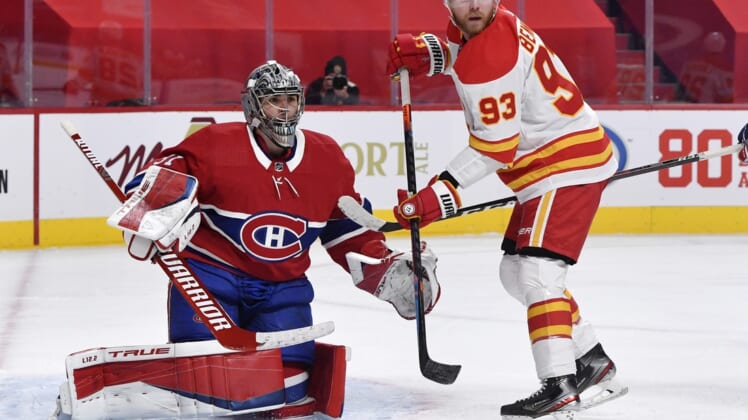 Three-game losing streaks happen in the NHL, so the losses on their own aren’t specifically disturbing the Calgary Flames as they prepare for Saturday’s road clash against the high-flying Montreal Canadiens.

It’s how the Flames are losing which is troubling, especially their last couple of outings.

Going back to the second defeat during their mini-swoon, the Flames were guilty of a dreadful first period against the Toronto Maple Leafs, in which they were outshot 10-1 before putting their game in order in a 4-3 loss.

Calgary’s 4-2 defeat in Montreal in the first half of this two-game set is a final score that flatters the Flames. They had a better first period, but trailed 2-0 thanks to a pair of Montreal power-play goals, and then lost all interest in the game when it became a 3-0 deficit.

A pair of goals in the final two minutes after it was already 4-0 made the final result semi-respectable, but is a prime example of putting lipstick on a pig.

“The third goal took a little bit of steam out of us,” coach Geoff Ward said. “We played a good first period down a couple goals on the power play, but we were still good, but the third goal put a sag in us and the fourth one did it a little bit more. You have to find moments in the game where you can garner emotion, especially when there’s no crowd.”

The Flames had best find the right formula soon in the competitive North Division.

The Canadiens are on the other side of the spectrum these days. Montreal has won three straight games, has not lost in regulation time yet this season and is rolling in all areas — especially on special teams. Not only are the Canadians lighting it up with their power play, but just seven games into the campaign they have already scored five short-handed goals, including Tyler Toffoli’s tally that made it a 4-0 game against Calgary on Thursday.

“We work hard on special teams. We spend a lot of time on them in practice,” coach Claude Julien said. “We talked about our power play from last season and we wanted to improve it. I think we have more elements on the penalty kill this year. It also helps to use players that are rested when we’re short-handed.”

Heading into the season hopes were high for the Canadiens, but the early success exceeds the expectations of even the most optimistic fans. On top of their special team success, the Canadiens have been an offensive juggernaut with a plethora of players showing great offensive touch.

As a case in point, defenseman Jeff Petry already has eight points, Toffoli has netted six goals and a team-high nine points, and second-year forward Nick Suzuki has a point in every game (two goals, five assists).

Related: If you’re a fan of the Flames, check out #NHLFlames rumors, rankings, and news here.

Even so, the leadership group is warning about complacency settling in.

“I think we’ve got a lot of room to improve here, and that’s a good sign because we’re playing well enough to win and we’re capitalizing,” defenseman Shea Weber said. “I think we just need to tighten up a few areas and we definitely need to be better on Saturday.”