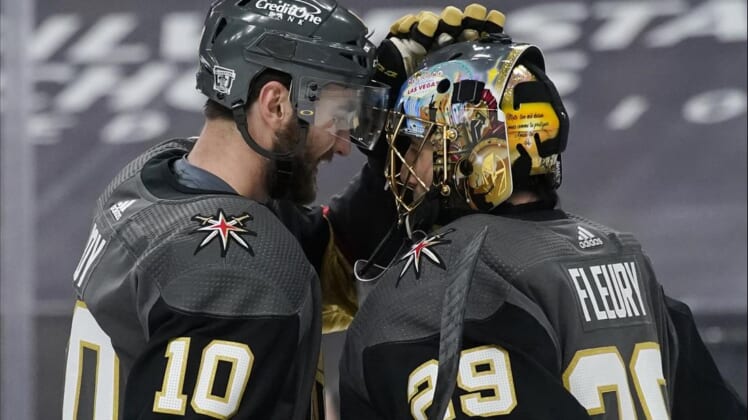 Off to the best home start in team history, the Vegas Golden Knights host the Anaheim Ducks on Tuesday night in the first game of a back-to-back in Las Vegas.

The heavily frontloaded home schedule has played a key role in the hot start for the Golden Knights, who are 6-0-1 in their seven games at T-Mobile Arena including a season-opening sweep of the Ducks. The lone home blemish for Vegas so far was a 5-4 shootout loss to St. Louis on Jan. 26.

The Golden Knights are 28-11-5 (.693) on home ice since the beginning of last season. What makes this season’s start even more impressive is that it has come without any fans at T-Mobile Arena, generally regarded as one of the loudest, if not the loudest, arena in the league.

“I think this a great place to play,” forward Reilly Smith said. “We were a little homesick for a while not being able to play here in eight or nine months (because of the COVID-19 pandemic). Fans or no fans, we know there’s a lot of support for us. It’s great to be able to play in this building.”

Vegas is averaging 4.14 goals in its seven home contests and had three-goal first periods in each of its wins over the Los Angeles Kings over the weekend. However, the Golden Knights, who allowed goals on each of the Kings’ first two shots of the game, needed a power-play goal by Chandler Stephenson early in the third period to break a 3-3 tie and earn a 4-3 win in Sunday afternoon.

Stephenson, who had his second two-goal performance in 218 career games, admitted his game-winner came on a cross-crease pass for Alex Tuch that deflected in between the pads of Kings goaltender Cal Petersen off the stick of defenseman Kale Clague.

“I was passing,” Stephenson said. “Just got the defender’s stick and went five-hole. Pretty lucky goal but I’ll take it.”

Vegas had to kill two power plays after that, as well as 90 seconds of a six-on-five to end the game after the Kings pulled Petersen. Two nights earlier, the Golden Knights had cruised to a 5-2 victory over the Kings by building a 5-0 lead in the first 27 minutes.

“I said from day one that beating any team in this league twice (back-to-back) is going to be really tough, and I think you see that around the league,” said Vegas coach Peter DeBoer. “The bottom line is we’re winning in a league it’s real hard to do that on a consistent basis. We’ll take it and try and get better every night here.”

Anaheim comes in off a split of its two-game series with visiting San Jose. Both games were decided in a shootout with the Ducks taking Saturday’s back end, 2-1. Ryan Miller finished with 26 saves and stopped two of three shootout attempts and Troy Terry and Max Comtois both scored in the shootout for the Ducks.

San Jose had taken a 1-0 lead just 11 seconds into the contest on a goal by Logan Couture before Anaheim tied it in the second period on Isac Lundestrom’s first career NHL goal.

“Really solid and very calming back there,” Ducks coach Dallas Eakins said of the 40-year-old Miller who moved within one win of Dominik Hasek (389) for 14th place on the NHL’s all-time wins list. “Knocking down that extra point for us is excellent.”