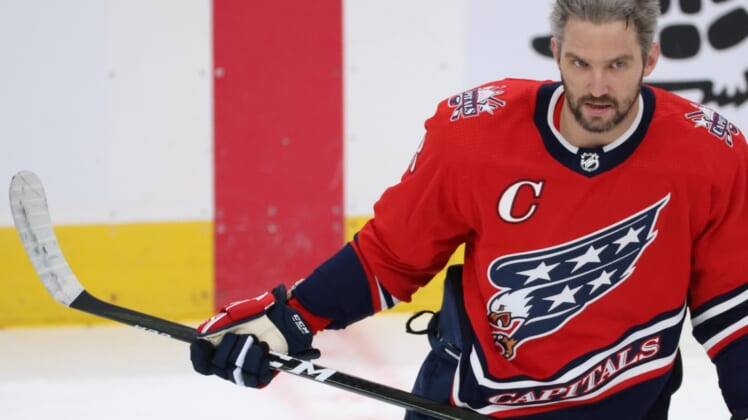 The New York Rangers come to Washington on Friday night after scoring seven goals in the second period Wednesday against Philadelphia. But New York will face a Capitals team that is hot and looking for a seventh consecutive victory.

Washington has won six straight games and is 10-1-0 in its last 11 despite spending a lot of time on the road. The Caps ended the Islanders’ nine-game winning streak with a 3-1 victory on Tuesday.

Ilya Samsonov was solid in net for Washington and improved to 6-0-1 this season in his first home appearance. He missed more than a month after going on the COVID-19 list but is 5-0-0 since coming back while rounding into shape.

Alex Ovechkin continues to be the big story for Washington on offense in the last few games. He blasted a shot past goalie Semyon Varlamov for a second-period power-play goal, and the veteran also assisted T.J. Oshie’s goal earlier in the period.

So, Ovechkin posted career point No. 1,300 on that assist and goal 718 on his score. That goal pushed the Washington captain past Phil Esposito (717) and into sixth place on the all-time NHL list.

Coincidentally, the Caps are 6-0-0 without physical right winger Tom Wilson, serving a seven-game suspension. Ovechkin has scored goals in four straight games and five of his last six overall, and role players such as Daniel Sprong also have pitched in.

The Caps will have their next five contests in D.C. after playing eight of 10 on the road.

They’ll have to deal with a Rangers team that rocked the Philadelphia Flyers 9-0 on Wednesday, thanks mostly to a seven-goal second period fueled by Mika Zibanejad. He assisted on the first three goals of that stanza and then added a natural hat trick.

Zibanejad’s six points in the second period tied a league record set by Bryan Trottier in 1978. The interesting part was that Zibanejad had scored just three goals this season in his first 27 games. Last season, he posted 41 goals in 57 games.

Zibanejad said he’s not sure what caused the slump but has felt like he’s been doing better in recent games. Everything just fell into place against the Flyers in that one period.

“Everyone is going to go back to last season and the expectation is obviously higher. But if the puck doesn’t want to go in, it doesn’t want to go in,” Zibanejad said. “I’ve been trying to get myself through this, and it hasn’t been easy. But it is what it is. It’s one game, but I feel like the game just overall has been feeling a little bit better for the past little bit here. Production is a big part of it when you get the ice time I’ve been getting and the role that I have. But as long as we keep winning, then I’m happy.”

Another strange part of that game was New York’s coaching situation. Coach David Quinn and assistant coaches Jacques Martin, David Oliver and Greg Brown had been put on the league’s COVID-19 list.

Their status for this game was not known as of Thursday.

Instead, Kris Knoblauch, who runs Hartford in the American Hockey League, stepped in versus the Flyers. His associate coach, Gord Murphy, and New York’s associate GM Chris Drury served as assistants.