PREVIEW: Nashville Predators look for breaks to turn their way vs. Blue Jackets 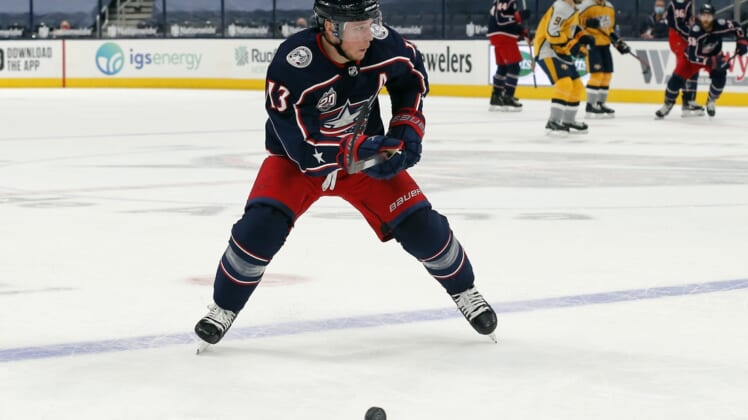 A shutout loss normally is not a positive sign, but the Nashville Predators are optimistic their 3-0 road defeat at the hands of the Blue Jackets on Thursday offers at least some good omens heading into the Saturday rematch, also in Columbus.

The Predators, who have lost five of six games and have a dismal 1-6-0 road record, had more than a little bad luck Thursday. The first Columbus goal late in the first period was a shot that ricocheted off a defender’s skate, the second tally came with a linesman providing a partial screen, and the third was an empty-netter.

The Predators like to think lucky breaks tend to even out, and Nashville’s players have reason to hope they’re about to pull out of their swoon.

“It’s incredibly frustrating, especially when you play a good game for the most part and you just can’t find ways to get rewarded,” Nashville defenseman Mark Borowiecki said. “But having said that, we can’t sit in here and feel sorry for ourselves and say, ‘Oh, we have no puck luck offensively.’ Because at this point, we’ve got to find ways to make our own luck.

“It might take a puck off someone’s chin going in the net off a tip shot or something, just something silly like that, to kind of open the floodgates for us.”

Making life more difficult for the Predators is an injury list that includes several key players: Ryan Johansen, Brad Richardson, Mattias Ekholm and Luca Sbisa. However, the onus is on those on the ice to pull the team out of the nosedive.

The Blue Jackets have a 3-1-1 mark in their past five games, a possible sign they are starting to find their form after early-season roster turmoil.

Leading the way is Cam Atkinson, who is riding a five-game goal-scoring streak and lit the lamp in six of the past seven outings. Sure, his latest goal, the deflected game-winner on Thursday, was fluky, but everyone will take those.

“A strange one for sure, but when you’re hot, you’re hot,” Atkinson said. “You just shoot the puck and good things happen. It wasn’t the prettiest, but I’ll take that and run away with it forever.”

That said, Max Domi’s second-period goal — even if there was a question whether the puck hit the official — was a goal-scorer’s tally that snapped a scoring drought. If Domi, a 28-goal scorer two seasons ago who has just three goals this season, also can get a hot hand, it’s a boon for a team needing offensive depth.

“Cam, even though he’s such a good goal-scorer, at the start of the (season) nothing wanted to go in for him,” Domi said. “It was like, ‘What’s going on?’ It’s like the hockey gods were against him. Now all of a sudden he’s playing unbelievable, as he was at the start of the year, and he’s being rewarded for it. That’s how it goes. You just have to keep chipping away.”

The same philosophy holds true for Domi and the rest of the Blue Jackets. Domi has had seven shots on goal the past three games and figures he’s due.

The Blue Jackets admit the Thursday victory was an ugly win, but those are just as important as pretty ones when it comes to finding a playoff spot.

“The first two periods, there wasn’t a whole bunch of offense by either team, and we found a way to win,” Columbus coach John Tortorella said. “That’s very important for us to get two points here, no matter how ugly it was.”