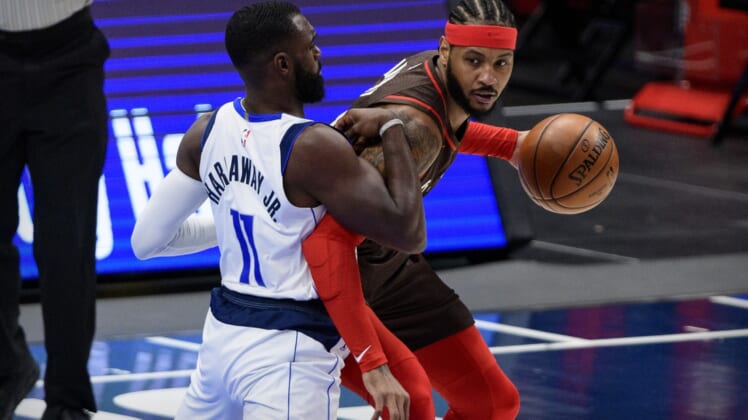 When Jusuf Nurkic and CJ McCollum went down with long-term injuries in back-to-back games in mid-January, the Portland Trail Blazers figured to take a major hit.

But coming into the game against the Oklahoma City Thunder on Tuesday in Oklahoma City, the Blazers have stayed afloat, going 8-5 without both Nurkic and McCollum in the lineup.

The Blazers come into Tuesday’s game with a four-game winning streak, tying their season-long streak.

Among the keys for Portland’s recent success are three players who have plenty of history with Oklahoma City.

First, there’s Damian Lillard, whose deep 3-pointer at the buzzer in Game 5 ended the 2019 first-round series between the teams, sending the Thunder on a path toward their current rebuild.

Lillard has averaged 30 points and 7.3 assists during the current win streak.

Carmelo Anthony, who spent the 2017-18 season with Oklahoma City, has revived his career in Portland and played a big role off the bench recently as well, averaging 21.3 points and shooting 44.8 percent from behind the 3-point line during the last four, despite shooting just 1 of 8 from behind the arc in Sunday’s 121-118 win in Dallas.

Tuesday’s meeting is the second of the season between the teams. The Thunder won 125-122 at Portland on Jan. 25.

Oklahoma City hasn’t had the same level of success after being hit hard recently by injuries, dropping six of their last nine, but the Thunder have kept things interesting. Four of their losses during that span have been by three or fewer points or in overtime.

The Thunder are coming off a 114-109 home win over Milwaukee on Sunday, their first win without a true point guard.

That has forced Thunder coach Mark Daigneault to be creative with his lineups.

In Sunday’s win, that meant not only starting Justin Jackson, who played sporadically early in the season, but putting the ball in Jackson’s hands late.

Jackson hit a 3-pointer with 14 seconds left to seal Oklahoma City’s win and has averaged 21 points over the last two games.

“We’re trying to look at this as an opportunity to try to discover different things with the team tactically and personnel wise,” Daigneault said. “And then we closed with him because obviously he was playing really well.”