A playoff series that started out as a race to four wins is now a battle for two victories to advance.

The Portland Trail Blazers took care of business at home in a 115-95 win in Game 4 to knot their first-round series against the Denver Nuggets at 2. Now it’s Denver’s turn to make adjustments for Game 5 at home Tuesday night.

The first adjustment is bringing energy to the start of the game. In the two losses to Portland in this series, the Nuggets came out flat and never recovered. Even with a chance to take a commanding 3-1 lead Saturday afternoon, they couldn’t find the spark against the Trail Blazers, who received an unusually subpar game from Damian Lillard. 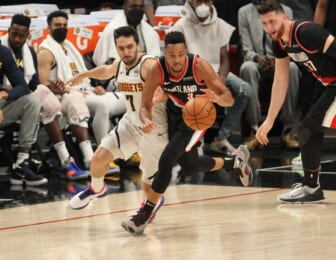 The Nuggets’ defense wasn’t much better. Norman Powell scored 29 points for Portland and more than made up for an off night by Lillard. Malone was upset with his team after it failed to get back on defense in one sequence that led to a thunderous dunk by Powell.

“I can’t believe that we’re actually talking about playing hard in a playoff game,” Malone said. “That should be a given.”

The series is playing out similarly to the second-round matchup between the teams two years ago. That series was 2-2 heading into Game 5 in Denver, with each team having already won once on the road. The Trail Blazers went on to win Game 7 on the road to advance.

This is the third straight year the Nuggets have reached the playoffs, and they’re on track to play a fifth Game 7 in their past six series if both teams hold serve on their home courts in the next two games. To ensure at least a chance to advance either in Game 6 or 7 Denver must get out of its funk.

The Nuggets are the deeper team despite not having Jamal Murray or P.J. Dozier available. They won’t have Will Barton for Tuesday night, but there is a chance he’ll be back for Game 6 or 7, Malone said Monday.

A key for Portland is having center Jusuf Nurkic staying in the game. He has drawn the primary assignment on Jokic and fouled out of Games 2 and 3. He stuck around Saturday and helped keep Jokic from dominating.

“We’re obviously better when Nurk is able to stay on the floor, especially against Denver,” Trail Blazers coach Terry Stotts said. “The offense comes and goes. He gets his opportunities. But I thought he really locked in defensively and was solid. Didn’t gamble very much and defended without fouling.”

“We got our (butt) whooped,” JaMychal Green said. “That should be all the motivation we need.”