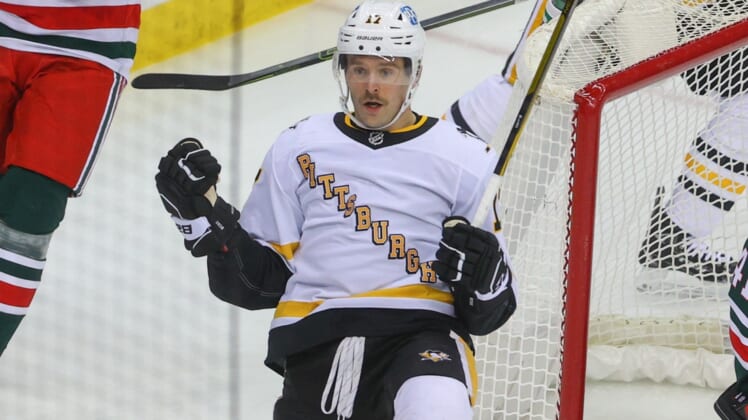 For all the firepower the Pittsburgh Penguins have in their lineup, playing responsible defense has been a point of emphasis.

It’s something they hope to continue Sunday against the visiting New Jersey Devils.

“That’s definitely our goal,” said Pittsburgh winger Bryan Rust, who had a goal and an assist in a 3-1 win Saturday at New Jersey.

“We’ve been doing it a lot more recently, and I think our collective effort has been a lot better. It’s not just one or two guys going, it’s all five as a unit — all six if you include the goalie. That’s key. … We’ve done a really good job of working together.”

Sunday will be the third straight game between the Penguins and Devils. In both games in Newark, Pittsburgh fell behind 1-0. Thursday, the Penguins gave up three goals for the first time in seven games and lost 3-2. On Saturday, they buckled down, didn’t allow another goal and won 3-1.

The Penguins won the special teams battle Saturday, scoring on one of two power plays and killing all four of New Jersey’s opportunities with the man advantage. They held the Devils to one shot on those opportunities despite missing two key penalty killers who are hurt.

Pittsburgh has been frustrated at times with its play while short-handed, but its penalty kill has been sharper lately.

“We just put an emphasis on getting in the shot lane,” Penguins winger Zach Aston-Reese said of what has made a difference.

The Devils had a power play goal in three straight games before Saturday, Kyle Palmieri, who scored the Devils’ goal Saturday during even-strength play, said it was clear what New Jersey has to do better in order to recapture some success with the man-advantage: “Everything.”

Pittsburgh already was without No. 2 center Evgeni Malkin, who missed his second straight game Saturday after being hurt Tuesday against Boston. He now is listed as being out week to week.

On Saturday, winger Brandon Tanev participated in the pregame warmup but did not return for the game because of an injury. His status for Sunday seems murky, as coach Mike Sullivan said Tanev is still being evaluated.

On the flip side, Penguins forward Jared McCann returned from injury Saturday. He has played on the wing most of the season but shifted into Malkin’s second-line spot at center.

That took some pressure off Pittsburgh at center, where third-liner Teddy Blueger also recently got hurt and is out longer term.

New Jersey goaltender Scott Wedgewood has made 66 saves through the first two games of this miniseries. It’s possible the Devils will come back with him on successive days for Sunday’s game.

Wedgewood was not scheduled to start Thursday but was pressed into duty on short notice when Mackenzie Blackwood got hurt during the pregame warmup. It’s not clear whether Blackwood will be available Sunday.

Wedgewood figures the “rubber game” of this stretch against Pittsburgh is more important than which goalie plays.

“We’ve got to regroup and go at them again (Sunday),” he said. “Obviously, you know what they’re going to bring and a couple of their looks. … A little bit baseball-like.”

For Pittsburgh, it seems likely that No. 1 goaltender Tristan Jarry will start in the back-to-back situation after backup Casey DeSmith made 24 saves Saturday.