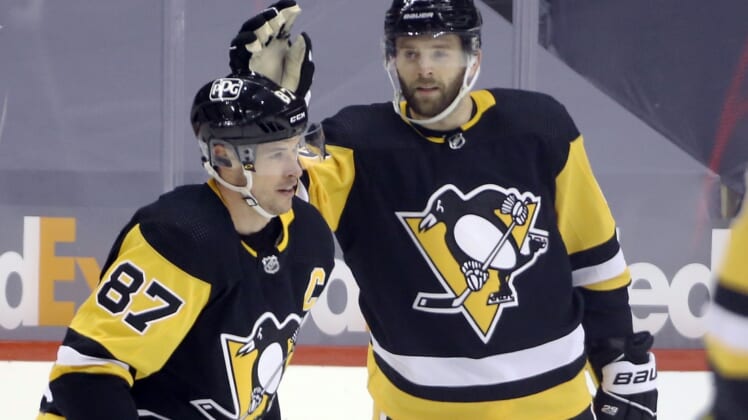 The Pittsburgh Penguins are looking to use Sunday’s win against the Washington Capitals as a template for a Tuesday rematch at PPG Paints Arena.

Pittsburgh ended an 0-for-21 power play skid, fashioned its first multiple-point lead of the season and got its defensemen actively involved in offense with four primary assists in the 6-3 win. The Capitals have lost four in a row.

The Penguins’ top line of Jake Guentzel, captain Sidney Crosby and Bryan Rust has been popping all season and combined for four goals and eight points Sunday.

They have accounted for four of the team’s seven game-winning goals and are the team’s top three scorers, each with five goals, Rust with 13 points and Crosby and Guentzel with 12 each.

“They’ve been dominant,” Pittsburgh coach Mike Sullivan said. “They’ve been a threat every time they’re on the ice. They’ve been so hard to play against, the way they possess the puck in the offensive zone and how stiff they are on the puck. … They force our opponent to have to expend so much energy defending them.”

“We’re playing complementary hockey,” he said. “We’re getting in on the forecheck, making plays. It’s great fun to play with those two guys.”

Pittsburgh will be looking to go 4-0-0 against Washington this season.

One troubling trend for the Penguins is falling behind. According to the NHL, they are one of just four teams historically that has come back from at least one deficit in each of their first seven wins in a season.

Fortunately for Pittsburgh, it has been resilient enough and gotten enough offense to come back in those games, including bouncing back Sunday after allowing the Capitals the opening goal.

On the flip side, Washington is looking to clamp down defensively as a prime way to end its four-game skid.

The Capitals, whose 3.77 goals against per game puts them near the bottom in the NHL, have allowed 22 during their four-game losing streak.

“We are trying to play hard and trying to do the right things, but it seems like we are doing the same mistakes over and over again, and we’ve got these easy goals against us, and it is an area we need to get better on — defensive zone,” Washington center Nicklas Backstrom said.

Capitals coach Peter Laviolette said defensive lapses Sunday weren’t plentiful so much as they were costly.

“I don’t think there was a ton,” he said. “I don’t think we were overwhelmed offensively. But the ones we gave up, we can do a better job.

“There are going to be things that we can do better, and (we) will continue to work at it to be better defensively.”

That could be a part of snapping the losing streak.

“I think our game is getting better,” Washington defenseman John Carlson said. “Feels like we are going longer stretches of going the right way and denying (opponents) the right way. It seems like those little parts of our game right now — whether it’s attention to detail or whatever it is — I think those lapses that we constantly talk about, we need to get better at.”