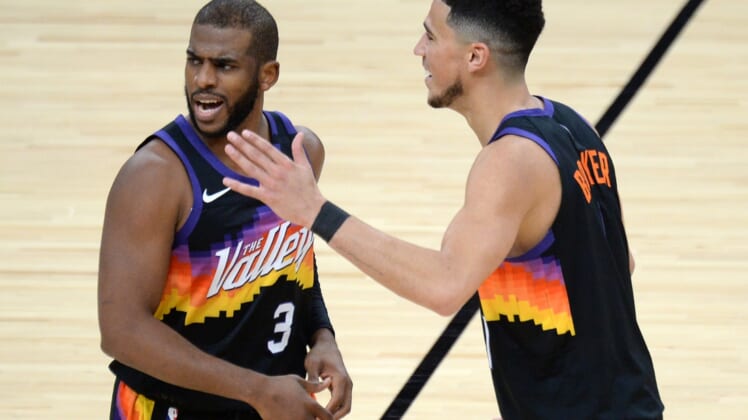 Having overcome a huge game by one big man Saturday, the Phoenix Suns must deal with another on Sunday night when they host Nikola Vucevic and the Orlando Magic.

Phoenix got a boost from Dario Saric, who returned to action Saturday after having missed 13 straight games due to COVID-related issues and a sprained left ankle suffered in conditioning drills.

Having scored in double figures five times in seven games off the bench earlier in the season, Saric matched his season-high with 15 points against the 76ers, his former team.

“It was a rough two months for me, but now it’s behind me,” Saric said, also referring to the start of the season, when he missed four of six games. “I’m looking straight. I’m having positive thoughts moving forward.”

While Phoenix was in action Saturday, the Magic earned a well-deserved day off following a pair of tight affairs at Golden State and Sacramento.

One night after suiting up just eight guys and blowing a late lead in a 111-105 loss to the Warriors on Thursday, the Magic used nine players to surprise the Kings 123-112 on Friday night.

Vucevic was the primary force behind the win, pouring in 42 points to complement nine rebounds. He shot 17-for-22 from the field, including making six of his eight 3-point attempts.

“He made all the big passes, the big plays,” Orlando coach Steve Clifford said afterward. “He’s playing at an incredibly high level every night.”

It hadn’t mattered much in the previous four games, during which his 28.0 points and 13.8 rebounds per night resulted in just one win.

But the Magic got veteran guard Michael Carter-Williams back from a 19-game absence due to a sprained foot against the Kings, and he responded with a season-best 21 points to go with seven rebounds and seven assists.

“Just having Mike on the floor was a plus,” Clifford said. “We played from ahead because of the stretch he played in the second quarter. It was a huge plus to have him back.”

The Suns and Magic have split the past two season series, with each team winning at home last year. Booker had 24 points when Phoenix prevailed 98-94 in the most recent meeting last January.

Vucevic has recorded eight double-doubles in his past nine games against the Suns, putting up an average of 20.3 points and 12.6 rebounds in those contests.