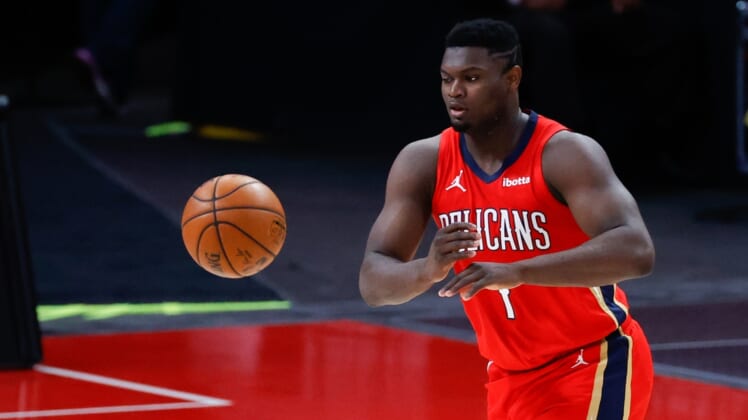 The Phoenix Suns and the New Orleans Pelicans both had poor defensive performances while losing their last game.

For the Suns it was an aberration. For the Pelicans it was all too familiar.

Both teams will try to bounce back when they meet Friday in New Orleans.

Phoenix saw its six-game winning streak end in a 128-124 home loss against Brooklyn on Tuesday. The Suns led 116-108 with less than five minutes remaining, but the Nets finished with a 20-8 run as Phoenix went scoreless for the final 2:48.

“We couldn’t get a stop the whole second half,” Phoenix coach Monty Williams said after his team allowed 74 second-half points. “It wasn’t (just) the last four minutes.”

The Suns, who are fourth the NBA in scoring defense (108.0), led by as many as 24 points in the first half, but James Harden (38 points, 11 assists) led Brooklyn back even with Kevin Durant and Kyrie Irving sidelined.

“It’s just easy to relax when you’re up big,” Suns forward Mikal Bridges said. “That’s what we did, and we gave them hope and confidence.”

The Nets didn’t lead in the game until Harden’s 3-pointer put them on top 126-124 with 31 seconds left. He added two free throws with 11.3 seconds remaining.

The loss was Phoenix’s only one during a seven-game homestand that featured victories against three of the top five teams in the Eastern Conference — Philadelphia, Milwaukee and Boston.

“We cannot just step onto the floor and think teams are just going to lay down when we have a lead,” Williams said. “Our intensity has to be at a high level whenever we step on the floor.”

Lillard drove to the basket for a go-ahead three-point play that provided the game’s final points with 16.5 seconds remaining in the visiting Blazers’ 126-124 victory Wednesday night.

“Our guys fought hard, but we just could not contain him at all,” Pelicans coach Stan Van Gundy said of Lillard. “Stopping them is 90 percent stopping him.”

Lillard had 43 points and tied a career-high with 16 assists.

“Our defense is everything,” Van Gundy said. “We are just not doing enough well.”

The Pelicans were playing 24 hours after registering a season-high point total in a 144-113 victory at Memphis.

They still had a chance after Lillard’s score, but Zion Williamson, who tied his career-high with 36 points, didn’t touch the ball on the final possession. Instead, Lonzo Ball missed a 3-pointer and Brandon Ingram missed a jumper.

“It is just frustrating,” Van Gundy said. “Our guys are playing well offensively. It is just so hard. There is so much pressure on your offense that you are going to talk about every missed opportunity on offense because you have to score virtually every time when you can’t stop anybody.”