PREVIEW: Phoenix Suns’ Game 5 task vs. Milwaukee Bucks on ‘the other side of hard’

Monty Williams’ words continue to ring in the ears of the Phoenix Suns.

So, after the Suns absorbed two straight losses to the Milwaukee Bucks to level the NBA Finals at two wins apiece, perhaps it’s no surprise that Devin Booker quoted his coach ahead of Saturday’s Game 5 in Phoenix.

“You guys heard what Coach said, ‘Everything you want is on the other side of hard,'” Booker said on Friday. “We know that if we want to do what we want to do as a team, it’s not going to be easy at all. Just get that out of your head, embrace the moment and understand this is it. It’s gonna be tough but you’re gonna have to overcome obstacles.”

The Suns will have help in that regard as the NBA Finals shifts back to Phoenix. The Suns have won eight of their 10 home games in the playoffs, including the first two of this series.

Booker answered a dismal 3-for-14 performance in Sunday’s Game 3 by erupting for 42 points three nights later in a 109-103 setback in Game 4. His total on Wednesday served as his third performance of at least 40 points in his first postseason, linking him with Hall of Famers Rick Barry (five times, 1967) and Wilt Chamberlain (three times, 1960) as the lone players in NBA history to achieve that feat. 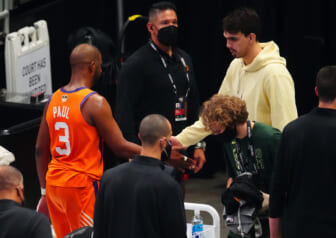 Also Read:
Phoenix Suns’ Chris Paul comes up small in the biggest game of his life

Chris Paul, however, was limited to just 10 points in Game 4 while committing five of the team’s playoff high-tying 17 turnovers. Phoenix committed just 22 turnovers in the first two games of the series, as opposed to 31 in the latter two.

On Friday, Paul dismissed the notion that a right-hand injury is contributing to his recent turnover troubles. “I’m good,” said Paul, who also nixed the idea that returning home is all that is needed to get the Suns back on track.

“Obviously this is our home court and (we’ll be playing) in front of our home fans, but that’s not going to be enough to win this game,” Paul said. “We have to come out and execute and play the way we’re capable of.”

Phoenix finds itself facing a confident Bucks team that has rallied from an 0-2 series deficit for the second time this postseason. Milwaukee did so against Brooklyn in the second round and overcame a Game 5 loss by winning the final two contests of the best-of-seven series.

Khris Middleton scored 10 of his playoff career-high 40 points in the final 2:07 of the fourth quarter on Wednesday. Given those impressive numbers and the team’s recent success, it’s no surprise that Middleton isn’t interested in changing his mindset heading into Game 5. 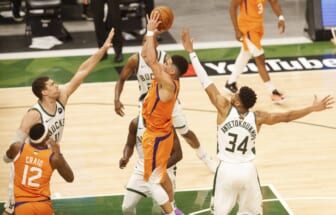 Also Read:
WATCH: Khris Middleton lifts Bucks to even Finals at 2-all

“Same focus, same intent that we’ve been having this whole time,” Middleton said. “Stay locked in. Play the right way. Compete. Play as hard as we can. That’s it.”

Giannis Antetokounmpo collected 26 points, 14 rebounds and eight assists for the Bucks, but the two-time NBA MVP’s night is best remembered for his jaw-dropping block on Deandre Ayton’s dunk attempt with 1:14 to play.

“It’s incredible what your body is gonna do when you are thinking about winning. You go to the extreme,” Antetokounmpo said of the block. “… At the end of the day, it’s in the past. When you talk about the past, that’s your ego talking. It’s over with. … Great moment, but we’ve got to move on.”