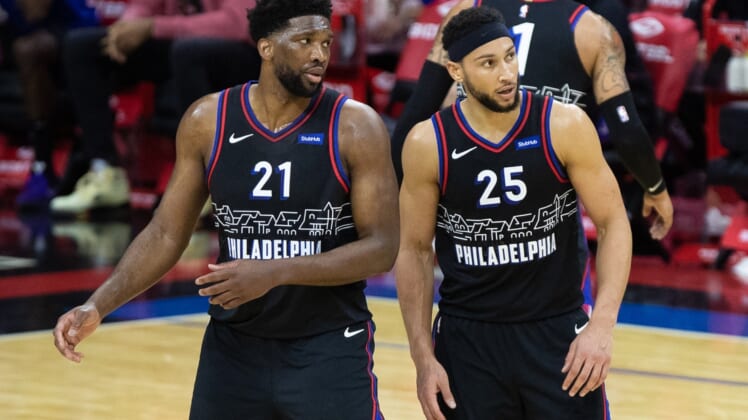 The Eastern Conference-leading Philadelphia 76ers already faced a crunch to begin the second half of the NBA season, including the first of nine sets of back-to-backs down the stretch.

Now Philadelphia must navigate Thursday’s visit to the Chicago Bulls without All-Stars Joel Embiid and Ben Simmons, who remain out due to issues related to COVID-19 contact tracing.

“We start on the road, back-to-back games, with one practice,” Philadelphia coach Doc Rivers said. “That’s a challenge in itself, right? Then, obviously, not having those guys, that’s a lot of points, our two best defenders. So, obviously, it would hurt.”

Embiid, who is averaging 30.2 points while bolstering his league MVP candidacy, can return when the 76ers visit Washington on Friday. Simmons, however, will miss the Wizards game, too.

Sure, it’s not optimal, but Rivers views the circumstances as a chance for the rest of the team to rally.

Philadelphia is 1-5 without Embiid and 2-3 with Simmons out of the lineup.

“I look at our team, and though we are leading the East, I think we also have the most room for improvement,” Rivers said. “That gets me excited when I think about our team.”

With five straight victories against the Bulls, including a 112-105 home win on Feb. 19, the 76ers aren’t necessarily aiming to better themselves in an all-time series Philadelphia leads 125-106.

Still, the loss of Embiid presents a significant gap in this particular matchup, as Embiid notched a career-high 50 points to go with 17 rebounds, five assists, four blocks and two steals in the first meeting against Chicago.

Zach LaVine paced the Bulls with 30 points in a game that helped clear a path to his first career All-Star appearance.

Chicago’s leading scorer missed the chance to share the experience with Embiid and Simmons, who were unable to appear at the festivities in Atlanta after being exposed to a barber who tested positive for COVID-19.

“Extremely unfortunate,” LaVine said. “From what I’ve heard, they did everything right. I think they had close contact with their barber, and the barber was getting tested daily. … It’s not like they were trying to hide it or they were doing something wrong. They did everything right and they still (were) in the wrong place at the wrong time. Extremely unfortunate and sad, but I think, with the time that we live in right now, you can’t be too safe.”

The Bulls won six of nine entering the All-Star break to improve their standing in the Eastern Conference playoff hunt. Chicago is tied with the eighth-place Toronto Raptors at seven games behind Philadelphia, but the Raptors are ahead by percentage points.

Chicago’s chase resumes Thursday, as the meeting with the Sixers tips off a five-game, seven-day homestand. The first three contests in that span are against teams ahead of the Bulls in the standings.