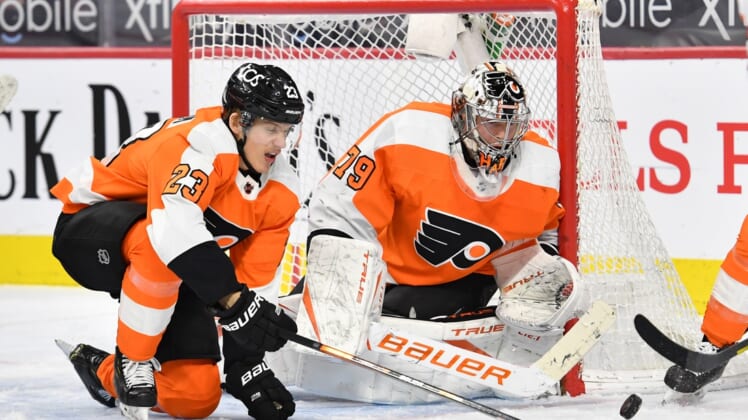 The Philadelphia Flyers will attempt to avoid their first three-game losing streak of the season Tuesday night when they play host to the reeling Buffalo Sabres.

The Flyers have not lost three games in succession since Jan. 7, 2020, but a 4-3 loss at Pittsburgh and a 3-1 home loss to the Washington Capitals over the weekend put them at risk of an extended losing streak. They also were the first consecutive defeats in regulation the Flyers experienced in more than a calendar year (Dec. 31, 2019-Jan. 4, 2020).

Since a number of key players returned from a COVID-19 pause — including Claude Giroux, Jake Voracek, Travis Konecny and Scott Laughton — the Flyers have been inconsistent.

“We came out here with the best intentions, playing in front of fans,” Flyers head coach Alain Vigneault said, referring to about 3,100 fans attending a game at the Wells Fargo Center on Sunday for the first time since March 10 of last year.

Joel Farabee gave the Flyers an early 1-0 lead, but the Flyers were fairly flat the rest of the way, playing their sixth game in nine days.

“We came out with good jump,” Vigneault said, “but we couldn’t finish the job.”

They have slipped out of a playoff spot, two points behind fourth-place Pittsburgh in the East Division, but in this unique 56-game season, they will have plenty of opportunities, beginning with Tuesday’s game against the Sabres.

“I’m pretty sure all the teams have the same schedule, so that can’t be an excuse,” Philadelphia’s Ivan Provorov said.

The Flyers struggled on the power play Sunday, going 0-for-4. Since Feb. 1, they are 6-for-47 on the man advantage.

The Flyers also scuffled at even strength. After taking a one-goal lead, they were never able to extend the advantage and allowed the high-powered Capitals’ offense too many chances.

“If we bury one of those, we’re in a real good spot with I think more energy and more gas in the tank,” Vigneault said. “We don’t, they tie it up and they made it real challenging for us.”

The Sabres, however, might be the best opponent for the moment, owning the league’s worst record and a maddening seven-game losing streak (0-6-1).

The Sabres dropped their last three games to the New York Islanders, each by a score of 5-2.

Buffalo has won only two of 13 games following its two-week COVID-19 pause at the beginning of February. The team has a league-worst 15 points and only four wins in regulation (six overall).

“There was at least a reaction in the third today, but in the end, we needed a result and we didn’t get it,” Sabres head coach Ralph Krueger said of Sunday’s 5-2 loss to the Islanders.

Buffalo, which has lost all six games against the Islanders, will have another difficult task against the Flyers. Philadelphia recently swept a pair of games at Buffalo, both 3-0 shutouts.

“I don’t think it’s a focus,” Jeff Skinner said. “I mean, I think, if you play hockey and you’ve reached this level, you understand all those things. That’s just part of the game, part of business. It’s not gonna do anyone any good to think about that when you’re on the ice. You play hockey and worry about how you can help the team win.”

After scoring 36 goals in 68 games last season, standout Jack Eichel has only two goals and has gone 13 games without a goal. He still leads the team with 16 assists and 18 points.

Scoring aside, defensive miscues have really hurt the Sabres.

“The individual mistakes that we’ve been making are something we need to address,” Krueger said.