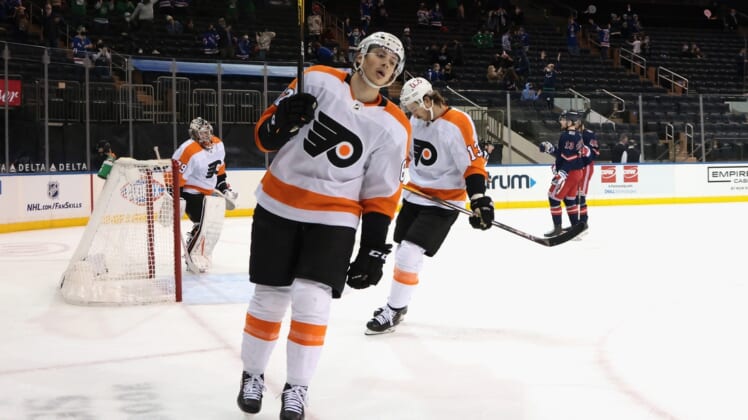 The New York Islanders officially made public Wednesday the news that their captain and co-leading goal-scorer, Anders Lee, will miss the rest of the season due to a knee injury.

The Islanders still had a better day and night than the Philadelphia Flyers.

The Flyers will look to make a quick recovery from one of the most embarrassing losses in franchise history Thursday night, when they will oppose the Islanders in Uniondale, N.Y., for the first of three straight games between the teams.

On Wednesday, Philadelphia gave up seven second-period goals to the New York Rangers in a 9-0 loss. The Islanders were off Wednesday after they had a nine-game winning streak and a 12-game point streak snapped Tuesday in a 3-1 loss to the host Washington Capitals.

The seven goals surrendered in the second were the most ever allowed in a single period by the Flyers, who began play in 1967. The Rangers scored those seven goals on just 17 shots. New York center Mika Zibanejad collected a natural hat trick — via a short-handed breakaway, an even-strength goal and a power-play goal — in a span of just 10:10.

Philadelphia hadn’t allowed nine goals in a regular-season game since a 9-8 loss to the Winnipeg Jets on Oct. 27, 2011, while the shutout loss was the most lopsided for the franchise since a 12-0 loss to the Chicago Black Hawks on Jan. 30, 1969.

“No doubt that we weren’t good tonight,” said Flyers head coach Alain Vigneault, who was the Rangers’ head coach the previous time they scored more than six goals in a single game on Nov. 15, 2016. “We couldn’t defend and couldn’t make a play. Got totally embarrassed. So we’ll get to Long Island and get ready for (Thursday).”

The Islanders have had time to adjust to life without Lee, who tore his right anterior cruciate ligament on March 11 while getting tangled up with the New Jersey Devils’ Pavel Zacha, who landed on Lee’s knee.

The team announced Friday that Lee would be out indefinitely and placed him on long-term injured reserve Sunday. New York president and general manager Lou Lamoriello announced Wednesday Lee would undergo surgery and should be 100 percent for the start of the 2021-22 season.

The Islanders won their first two games without Lee and will enter Thursday in a tie for first place in the East Division with the Capitals. However, Lamoriello acknowledged Wednesday the absence of Lee — who had 12 goals and seven assists in 27 games — will impact his approach as the trade deadline approaches.

“We will not do something just for the sake of doing it, but we’re now looking a little different.”