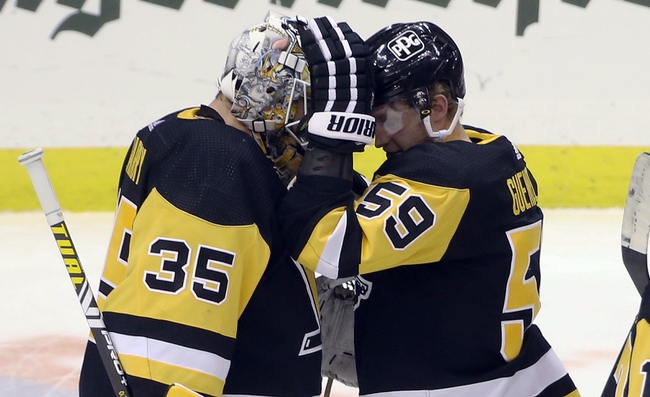 The Pittsburgh Penguins look to carry the momentum from a perfect homestand into a two-game road series against the Boston Bruins beginning Tuesday.

The Penguins have won four straight since dropping their first two contests on the road at the Philadelphia Flyers. Each of Pittsburgh’s victories required comebacks, with three extending beyond regulation.

Such was almost the case last time out for the Penguins, but Jake Guentzel scored with 1:31 remaining for a 3-2 win over the New York Rangers on Sunday. The marker was Guentzel’s 100th career goal.

“It’s nice to just get points, and when you can win in regulation, obviously you’re not giving up points to your opponent,” Penguins coach Mike Sullivan said. “We’re in a divisional race here. There’s a lot of parity in the division. There’s a lot of really good teams. We’re trying to win each game right in front of us.”

The Bruins are one of those division opponents, and they enter Tuesday’s matchup after two straight victories over the Flyers. Boston’s offense exploded Saturday in a 6-1 win, with Brad Marchand and Patrice Bergeron each scoring a pair of goals.

“I thought we had a great effort,” Marchand said. “Not only this evening, but the last couple games. … We’ve continued to build on our game.”

The Bruins and Penguins will play eight times during the regular season, including the second matchup of the two-game set at Boston on Thursday. The teams are 6-6 in their last 12 meetings.

For Boston, the key to success lies on the power play, where the team has scored six goals between its three wins this season. The Bruins were 3 for 4 on the man advantage in their most recent win over the Flyers, with Nick Ritchie assisting on two of the tallies.

“He’s really good down around the net,” Marchand said. “He’s strong on pucks and makes really good, quick little plays. I think we’re starting to build that chemistry … it’s great to have him there.”

Ritchie, acquired midseason from the Anaheim Ducks last year, is third on the team in points at five, behind only Marchand (seven) and Bergeron (six). The 25-year-old’s play has been a boon for Boston with the absence of star winger David Pastrnak (hip), who practiced Monday in a regular jersey but is still a stretch to rejoin the team prior to the end of the month.

The Penguins, meanwhile, are monitoring Evan Rodrigues after the forward departed Sunday’s win with a lower-body injury sustained on a collision. Rodrigues had played on the top line beside Sidney Crosby and Guentzel; after he was injured, Bryan Rust moved up and scored the team’s first goal of the game.

“When we made that change and we put Rusty up there, they had instant success,” said Sullivan. “Those guys are familiar with one another.”

Pittsburgh is still looking to get Evgeni Malkin going — the star center has been held to one power-play goal and an assist through his first six games this season.