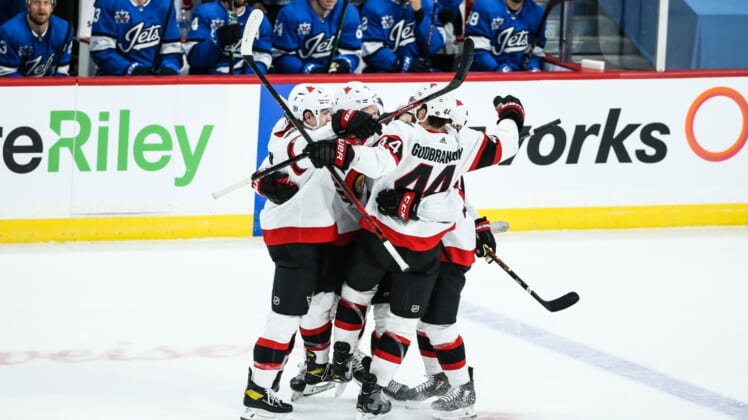 The Ottawa Senators received a boost from their last-minute win over the Winnipeg Jets on Saturday and they hope that the momentum carries over into Monday night when they visit the Toronto Maple Leafs for the opener of a three-game series.

Brady Tkachuk scored at 19:51 of the third period to give the Senators a 2-1 victory over the Jets that ended a four-game losing streak.

Tkachuk deflected Mike Reilly’s shot from the point, giving the Senators their third win of the season and a split of two games in Winnipeg.

The Maple Leafs, meanwhile, had a four-game winning streak end Saturday when the Montreal Canadiens came back with two third-period goals to defeat them 2-1.

The game Monday will be the first between the teams since they split two in Ottawa over Jan. 15 and 16.

“We’re getting sick and tired of losing,” Tkachuk said after his winning goal on Saturday. “I think everybody is, and it’s definitely nice to get a win under our belt. Hopefully, we keep playing this way and everybody’s got the confidence we need to keep doing that.”

“We’ve got to learn to be patient and not force the game, and we didn’t do that,” Senators coach D.J. Smith said. “We hung around long enough and got a couple of bounces that maybe we hadn’t got (before).”

The win takes some pressure off Senators backup goaltender Marcus Hogberg, who picked up his first victory after five losses to start the season. No. 1 goaltender Matt Murray is listed as day-to-day with an upper-body injury.

Hogberg gave up two goals in relief of Murray in the 5-1 loss to the Jets on Thursday and allowed three goals on 13 shots in 24 minutes in a 3-2 loss on Tuesday against the Edmonton Oilers.

Hogberg made 30 stops on Saturday and was at his best in the third period.

“I feel really good for myself and the team to get a win here,” Hogberg said. “It was a good game by us. I’m really proud about the way the guys were playing in front of me. It was a really nice win.”

As the Senators have struggled, the Maple Leafs have soared. They appeared to be on the way to their 12th victory of the season when Mitchell Marner scored early in the first period. But Montreal tied it early in the third and won it on Brendan Gallagher’s goal at 16:53 of the third.

“I would say towards the end of the first period, it started to get away on us,” Maple Leafs coach Sheldon Keefe said. “I thought through the first period we could have very easily been up at least two or three (to) nothing with some of those point-blank chances that we had and missed. … We had more than enough offense there in the first to blow the game wide open and didn’t capitalize or didn’t go our way. Our game was a mess from there.”

“I think we got away from our game plan, composure in our D zone, staying on too long for offensive chances,” Marner said. “That one sucks to slip away but just got to look forward to Ottawa next.”

On a brighter note, Joe Thornton said Sunday that he expects to play for the Leafs on Monday after missing 10 games with a broken rib. The 2005-06 league MVP has just two points (one goal, one assist) this season while playing primarily on a line with Marner and Auston Matthews.