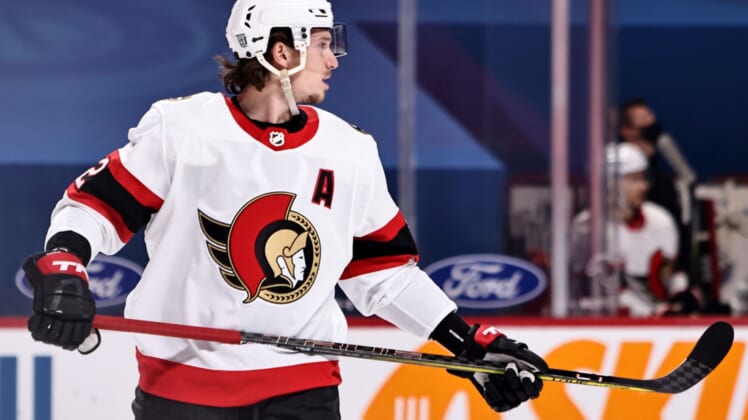 After enduring another narrow defeat, the Ottawa Senators will look to finally break through against the Edmonton Oilers when the teams meet on Wednesday in Edmonton.

The Senators dropped a 3-2 result to the Oilers on Monday, falling to 0-5-0 against Edmonton this season. Apart from the Oilers’ 8-5 rout on Jan. 31, however, the two teams have played each other fairly evenly. The other four games were decided by either one or two goals, and Ottawa has outshot Edmonton by a 161-150 margin over the five games.

Monday’s game saw the Oilers hold an 37-28 shots edge, although the game was ultimately decided by a pair of costly Ottawa mistakes in the second period. Edmonton twice took advantage during Senators line changes, swiftly advancing the puck up the ice first for an Alex Chiasson power-play goal, and then Leon Draisaitl’s eventual game-winning tally.

“You’ve got to get on and off the ice,” Senators coach D.J. Smith said. “A couple of bad changes (ended) up in goals for them. … Our penalty kill did a good job, and there’s 10 seconds left and guys were racing off, and then they had the quick-up on the other goal. Those are great shots by really good players.”

Tim Stutzle scored later in the period to narrow the Oilers’ lead. It was Stutzle’s first goal in nine games, and the rookie’s third score in five games against Edmonton.

Senators defenseman Thomas Chabot has 12 points (all assists) over his last 10 games.

The Oilers have won consecutive games since the line of Draisaitl, captain Connor McDavid and Kailer Yamamoto was put together partway through Saturday’s 3-2 win over the Calgary Flames. Over the last two games, McDavid has five points (one goal, four assists), Yamamoto has two goals and an assist, and Draisaitl has a goal and an assist.

It remains to be seen how long Edmonton will continue to play superstars McDavid and Draisaitl on the same line, although the third man in the mix is naturally fond of the situation.

“It’s exciting. Any time you get to play with the two best players in the world, you definitely get up for that,” Yamamoto said. “I’m just trying to play my game and get to the net.”

Draisaitl’s goal on Monday snapped an eight-game scoring drought for the forward, although he still had eight assists over those eight contests.

Josh Archibald is questionable for Wednesday’s lineup after missing Edmonton’s last two games due to an undisclosed injury.

After backups Mikko Koskinen and Joey Daccord started Monday’s game, both teams are expected to play their regular starting goaltenders on Wednesday.

Edmonton’s Mike Smith is off to a very strong start in his 15th NHL season. Smith is 7-2-0 with a .925 save percentage and 2.29 goals against average this season.

Matt Murray is 0-1-0 with a .904 save percentage and 2.99 GAA in three appearances against the Oilers this season.

The Senators and Oilers will conclude this three-game mini-series with one more contest in Edmonton on Friday.