PREVIEW: Oregon gets first taste of tourney vs. second-seeded Iowa 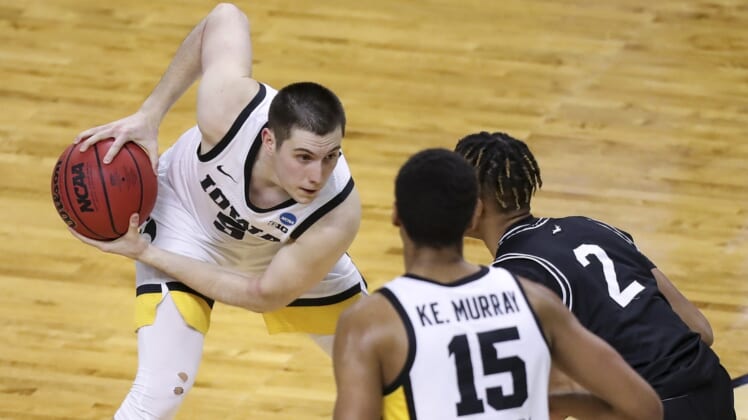 Iowa advanced to the NCAA Tournament second round Saturday with a win on the court in Indianapolis. Oregon had hoped to play but moved on without making a single shot.

The two schools meet Monday afternoon in one of the early second-round games of the day — the No. 2 seed Hawkeyes against the Pac-12 regular-season champion and seventh-seeded Ducks in the West Region.

Iowa (22-8) defeated Grand Canyon of the Western Athletic Conference on Saturday behind 24 points from star Luka Garza and 10 made 3-point shots as a team.

Oregon was to play VCU later that day, but the Rams were forced to pull out of the tournament due to COVID-19 protocols; local public health officials decided it was unsafe for them to play.

The NCAA declared a no contest with the Ducks (20-6) moving on to the next round.

“During these challenging times, health and safety is the highest priority. We would like to wish the VCU student-athletes and staff all the best, and congratulate them on an outstanding season. We hate to see a team’s season end this way after all the hard work these student-athletes have put in. This isn’t the way we wanted to advance, but we are excited to be moving on, and we will start our preparation for Monday’s game,” Oregon head coach Dana Altman said in a statement on its website.

The Hawkeyes led from start to finish on Saturday behind 16 points and eight rebounds from Joe Wieskamp. Their No. 2 seed is the highest the program has earned since 1987. This year marks Iowa’s 27th NCAA Tournament appearance, and its fifth in 11 seasons with head coach Fran McCaffery at the helm.

The Ducks have won 11 of their last 13 games but haven’t played since last Friday, a Pac-12 Tournament semifinal loss to eventual champion Oregon State.

Oregon has won back-to-back conference regular-season titles and has advanced to the Sweet Sixteen (2019), Final Four (2017) and regional final (2018) in its last three NCAA Tournament appearances.