PREVIEW: On brink of elimination to Montreal Canadiens, WInnipeg Jets ‘keep believing’ in themselves

Jun 6, 2021; Montreal, Quebec, CAN; Winnipeg Jets right wing Blake Wheeler (26) during the warm-up session before the game three against Montreal Canadiens of the second round of the 2021 Stanley Cup Playoffs at Bell Centre. Mandatory Credit: Jean-Yves Ahern-USA TODAY Sports

The Montreal Canadiens can defeat the visiting Winnipeg Jets on Monday night to sweep their second-round North Division playoff series by staying with a formula that has worked so well for them.

They have scored first in each of the first three games of the best-of-seven, and that is a good thing when Carey Price is your goaltender.

The Canadiens pushed the Jets to the brink of elimination with a 5-1 victory Sunday night when the series moved to Montreal. Winnipeg has not led in any of the three games.

Only four teams in NHL history have overcome a 3-0 deficit to win a series. The most recent was in 2014 when the Los Angeles Kings defeated the San Jose Sharks in the first round.

“I think you’ve got to keep believing,” Jets captain Blake Wheeler said. “You can’t reinvent the wheel now. You can’t start over and try to do something completely different. Hopefully, we get a bounce to go our way. Hopefully, a shot goes off one of their sticks and ricochets into the net and we’ll take a lead and see how it looks from there. Outside of that, you can’t doubt the process.”

“We’re going to have to get to another level on a lot of those stick fights,” Jets coach Paul Maurice said. “We’re not coming up with the pucks that we need to come up with at times, and that’s got to be better.”

The Canadiens have won six straight playoff games since falling behind 3-1 in their first-round series. They then ousted the Toronto Maple Leafs.

“We know from the last series how quickly things can change,” said Canadiens right winger Brendan Gallagher, who had an assist. “We have the advantage, but you have to make sure you don’t give the other team any life. Tomorrow night’s another game, and we hope to win it in front of our fans.”

Corey Perry opened the scoring at 4:45 of the first period, and Montreal led 3-0 before Winnipeg scored late in the second period.

Joel Armia scored two short-handed goals, one into an empty net, and added an assist.

“I think our penalty kill has been pretty good in these playoffs,” Armia said. “Everybody has the same game plan out there, and we are working together.”

The Jets had chances in the second period, with Wheeler and Nikolaj Ehlers hitting the crossbar with shots.

“We hit a couple of crossbars,” Maurice said. “So there’s shots that are being taken that are the right ones to take. And we’ve got to get the inside of the bar, not the out.” 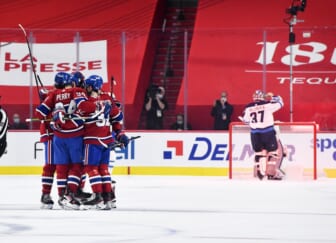 The game became chippy at the end.

“We talk about controlling our emotions and funneling them in the right way,” Canadiens coach Dominique Ducharme said. “We can play with emotion but express it on the ice in a way that will help the team. That’s where our focus is, we want to be winning. That’s the only thing we think about or care about is winning. We’re preparing for tomorrow and we’re going to have the same mind set.”

Canadiens defenseman Jeff Petry caught a finger in a hole in the glass designed for photographers in the second period. He returned to the ice after treatment, but missed the third period. His status for Game 4 was not immediately known.