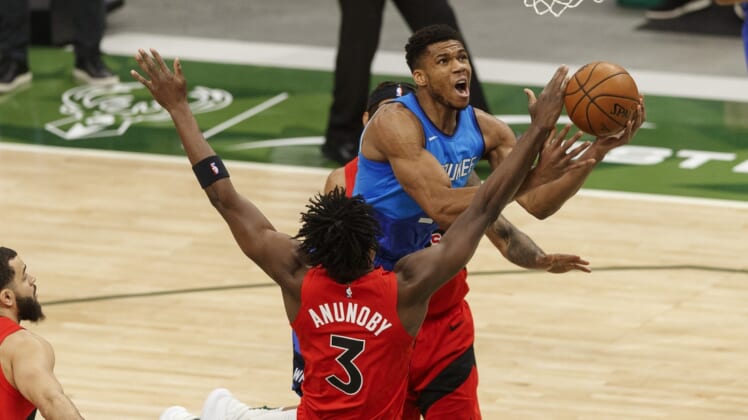 The Milwaukee Bucks are trying to work through something they haven’t previously experienced in Mike Budenholzer’s three seasons as coach — a five-game losing streak.

“We’re just in a little bit of a funk offensively,” Budenholzer said Thursday night after the Bucks lost 110-96 to the Toronto Raptors. “But I think we can work through it.”

The third game in Milwaukee’s five-game skid was a 114-109 defeat to the host Oklahoma City Thunder on Sunday. The Bucks and Thunder meet again Friday in Milwaukee.

Jrue Holiday’s absence has certainly played a significant role in the Bucks’ skid.

His return date is uncertain.

“We’ve lost one of the best players on the team and playmakers and best defenders on the team, (he) is not playing with us,” Bucks star Giannis Antetokounmpo said. “It’s not an excuse. I’m not the guy that keeps excuses, but he’s a big part of who we are. We need him. We need him back when it’s safe for him to play.”

Antetokounmpo said Holiday’s return wouldn’t be a magic elixir, but it would push the Bucks in the right direction.

“That doesn’t mean when he comes back we’re going to play better because it’s a team, it’s a group,” Antetokounmpo said. “But it’s going to make things easier for Khris (Middleton), for me, for Jrue, for Donte (DiVincenzo), for Bryn (Forbes), for everybody else offensively and defensively.”

Middleton has been one of the players most affected by Holiday’s absence.

In the season’s first 23 games, Middleton was shooting 46.5 from behind the 3-point arc and was among the NBA leaders in offensive rating.

Without Holiday, Middleton is shooting 28.6 percent from long distance and his offensive rating has plummeted.

On Sunday against the Thunder, Middleton was just 10 of 22 from the field and 2 of 7 from 3-point range.

The Friday’s game will be the third of eight consecutive home games for Milwaukee.

Oklahoma City is coming off a 122-113 road loss to the Memphis Grizzlies on Wednesday. The Thunder have dropped five of their past six, the lone win coming against the Bucks.

The Thunder were without starting point guard Shai Gilgeous-Alexander — or any true point guard — when they beat Milwaukee.

However, Theo Maledon returned from health and safety protocols Tuesday and Gilgeous-Alexander came back from a left knee sprain Wednesday.

“Knee feels good,” Gilgeous-Alexander said after scoring 22 points and handing out six assists in his return. “It feels 100 percent. … I felt like I needed to get my wind a little bit in the first quarter, which is expected (after) being out a week or so.”

One of the players to step forward in Gilgeous-Alexander’s absence was Justin Jackson. He was used sparingly early in the season but scored a season-high 22, hitting all four of his 3-point attempts, in the win over Milwaukee. It was Jackson’s second consecutive game with 20 or more points.

In the two games since, Jackson saw his minutes decrease dramatically and he averaged just five points.