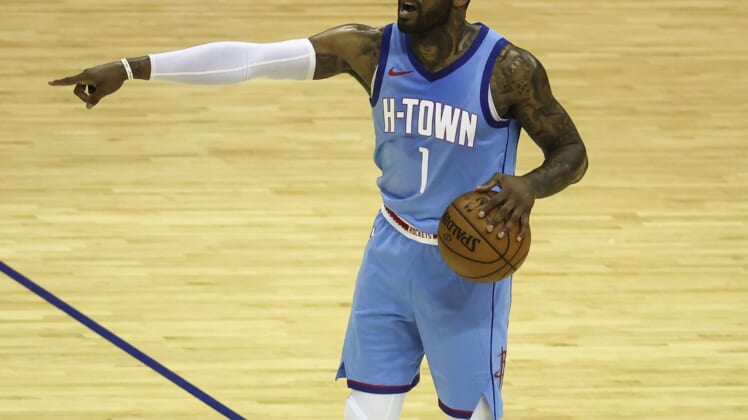 On Friday night against the Detroit Pistons, the Houston Rockets had guards John Wall and Victor Oladipo plus Christian Wood simultaneously available for the first time since a 30-point win over the Oklahoma City Thunder on Feb. 1.

Roster attrition via injuries and defections robbed the Rockets of their potential, or at least of the opportunity to evaluate how those available pieces could mesh. That Houston has been unable to get a clear view of what that trio can accomplish together underscores why things have come undone, with the 113-100 loss to the Pistons extending the franchise-worst losing streak to 19 games.

But some of what ails Houston, which is set to host the Thunder on Sunday, has little to do with who has or who hasn’t been available for duty. As the losses mount, the Rockets have fought the urge to relent to this lost season, and truthfully, some yielding has come defensively.

“I think the most important thing is just play hard,” Wall said. “With us, we know our offensive sets. My job is to get guys shots and move the ball as much as possible. But the effort we have on the defensive end at times and the lapses we have, that has nothing to do with team camaraderie or chemistry. It’s about putting effort out there.”

Beyond searching for a win that would stem the tide of so many consecutive losses, the Rockets remain hopeful that optimal health will finally afford them the opportunity to evaluate. Houston has an uneven mix of veterans and youth, with the desire to commit to the right combination of players linked to uncovering exactly how those players complement one another.

The Thunder have dropped three of their last four games, including a 116-93 setback to the Atlanta Hawks on Thursday in the second game of their current four-game road trip. Oklahoma City has lost by at least 20 points in each of those three defeats yet, despite constructing a roster that leans fully into rebuilding, the Thunder have yet to lose more than three consecutive games this season.

Still, for a team that ranks 12th overall in defensive rating, the recent struggles defensively are concerning. The defense has slipped of late.

“Compete more defensively,” Thunder guard Shai Gilgeous-Alexander said in reference to fixing what has ailed the Thunder of late. “I feel like that was the biggest thing.