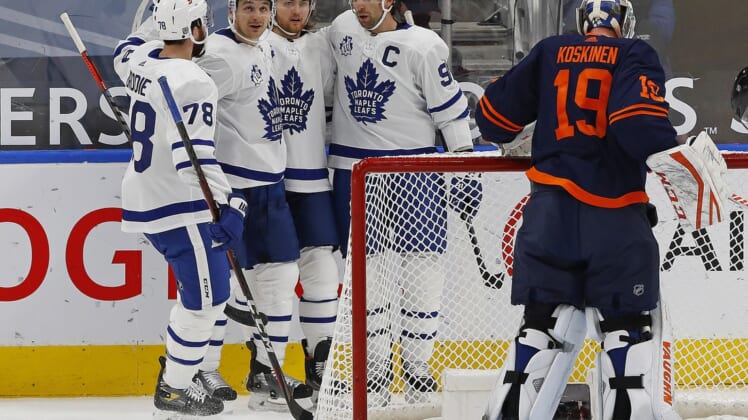 The Toronto Maple Leafs will be going for a four-game Western Canada sweep Saturday night when they complete a two-game set against the host Edmonton Oilers.

The Maple Leafs, who defeated the Oilers 4-3 Thursday night, also will be trying to stretch their overall winning streak to five games.

After defeating the Oilers in Toronto on Jan. 22, the Maple Leafs won twice over the Flames in Calgary.

“I like the way that we’ve found ways to come out on the positive side of it when it counts the most,” Maple Leafs coach Sheldon Keefe said. “Whether it’s how many games now we’ve had a really big penalty kill very late in the game with the game on the line, we find our way through those. We gave up the lead and then we bounce right back and get it and then make sure we finish the job. That’s been a theme. I like that.

The Oilers are 1-3-0 since defeating the Maple Leafs in Toronto on Jan. 20.

Leon Draisaitl had two goals for Edmonton on Thursday. He has scored in five straight games and has six goals.

The Oilers twice tied the game Thursday after the Maple Leafs took a 2-0 lead. Auston Matthews scored the winning goal on a power play at 13:37 of the third period.

The Leafs have won five games by one goal, with the other two wins coming by two goals when they scored into an empty net.

“We got the win, that’s all that matters,” said Matthews, who has five goals. “We’re taking too many penalties. We had big penalty kills, big power-play goals. Sometimes that’s the way the game goes, special teams come through. Obviously, we squeaked out this one.”

“You’ve got to find ways to win and find ways to lose, right?” Oilers coach Dave Tippett said. “That’s what bothers me. We’re making mistakes that are taking away from our chance to win. It feels at times we’ve played better than our record, but we’ve got that record because we’ve brought a lot of that trouble on ourselves.”

Despite the fast start, Keefe feels that his team has room to improve.

“We’re not even close to being the team that I think we can be and the team that we would need to be,” he said. “But a lot of positive things that have gotten us to be 7-2. I think the greatest news of all is that none of the games have been perfect and there’s lots of room for growth still.”