PREVIEW: Off to their 24-game best start ever, Carolina Hurricanes host Nashville Predators 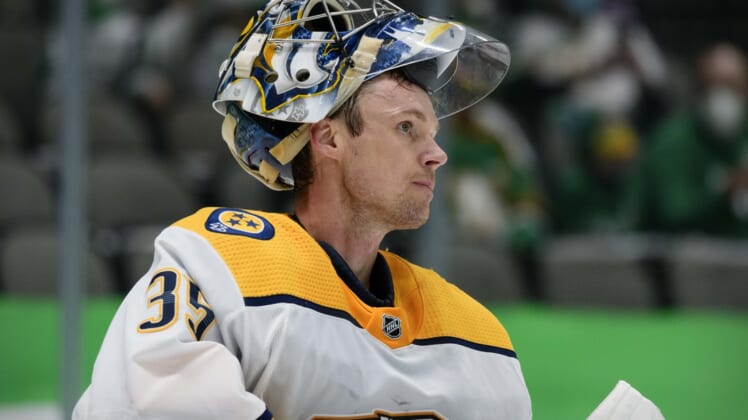 The Carolina Hurricanes are trying to continue their best stretch in a decade.

The Hurricanes attempt to stretch their winning streak to six games when the Nashville Predators visit for Tuesday night’s game in Raleigh, N.C.

The Hurricanes have been hitting the right buttons during the past couple of weeks.

“Our mentality and the way we played was right from the start,” Hurricanes center Sebastian Aho said after Sunday’s 4-2 triumph over the Florida Panthers.

The Predators are 1-3-0 this month, with the lone success coming with Sunday night’s shootout triumph at Dallas. That was the beginning of an eight-game road trip.

“That’s a really good start for this road trip. It’s going to be a long one,” Predators center Mikael Granlund said. “Let’s go from here.”

Nashville left winger Filip Forsberg said: “We got to get wins. We’ve got to get those two points.”

Nashville began the month with a 4-2 home loss to Carolina, and the teams will also meet again on Thursday night.

Goalie Pekka Rinne was spectacular at times against the Stars, particularly during the shootout. The Predators have come to expect that from him.

“It’s normal for us,” Granlund said. “We see that every day, so nothing special for us.”

Hurricanes center Vincent Trocheck, who has a goal in four of the last five games, has a team-leading 13 goals. He’s scored 22 points in his 23 games, and is on pace for the best season of his eight-year career.

“It’s just the guys around me are helping a lot,” Trocheck said.

The steady production from Trocheck has added to Carolina’s firepower.

“You don’t expect him to score at this rate, but we’ll take it for as long as we can,” coach Rod Brind’Amour said.

Then there’s right winger Nino Niederreiter, who has racked up 11 goals. That matches his total from last season.

This marks the first visit of the season to Raleigh for the Predators. They sense the need to make a move even with the extended road stretch.

Not all is rosy for the Hurricanes. Winger Teuvo Teravainen was out of the lineup Sunday, just one game after he returned from a seven-game absence because of a concussion. Brind’Amour said Teravainen’s situation might be related to the previous injury.

“We always err on the side of caution for the players,” Brind’Amour said. “Hopefully it turns really quickly and we get him right back.”