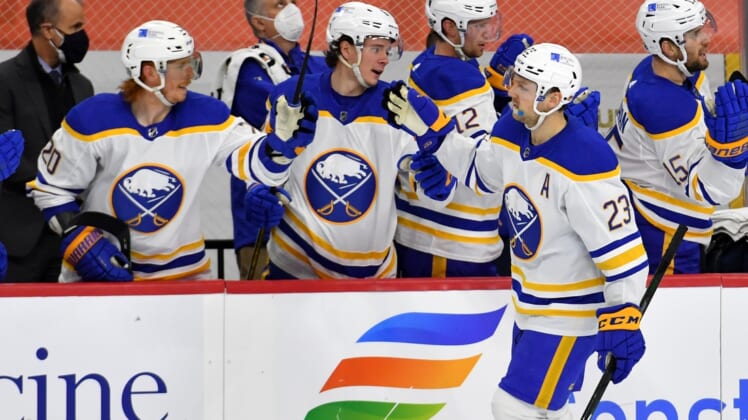 The Buffalo Sabres’ 11 straight games without a win are their most in six seasons.

One of those slides will come to an end on Tuesday night when the Sabres visit the Devils in Newark, N.J.

The Sabres, who managed just nine of their 23 shots through the first two periods of Monday’s 6-0 home loss to Washington, have been shut out six times — equaling their number of wins this season – and in back-to-back games.

Buffalo, which has also allowed at least five goals in six of the last seven, was last blanked in three consecutive contests during March 2019. At least publicly, Sabres players appear to still support embattled coach Ralph Krueger and each other.

“Love the group of guys, love the coach,” said Sabres forward Sam Reinhart, who has gone without a point in three straight games but has three goals with two assists in three against the Devils this season.

Plagued by some shoddy defense in front of him Monday, Buffalo’s Carter Hutton stopped 24 of 30 shots in losing his ninth straight start (0-8-1). He has yielded eight goals in losing two games to New Jersey, one in overtime, this season.

“What we need to do is react (Tuesday),” Krueger said. “We will do that, and we will work toward that.”

Buffalo is 3-1-1 against the Devils this season and will be looking for a third consecutive road win over New Jersey.

Since a season-high three-game overall winning streak from Jan. 31-Feb. 18 — a span that included pandemic-induced postponements — the Devils are 2-10-2 and allowed 51 non-shootout goals.

Though New Jersey lost its fourth straight on Sunday, it did manage a point in the 3-2 shootout home loss to the New York Islanders. Janne Kuokkanen scored in his fourth consecutive contest, and Scott Wedgewood made 32 saves.

New Jersey has been held to two or fewer goals eight times in the last 12 games.

“You want to win games like that,” forward Pavel Zacha, who has recorded just one of his team-high 17 points over the last four games, told the Devils’ official website.

“We had some good looks, but we just couldn’t score… We need to score more.”

New Jersey has totaled 15 goals versus Buffalo this season, but also allowed 17 in those games. Zacha has a goal with six assists against the Sabres in this season, while Buffalo native Miles Wood recorded three of his eight goals in 2021 versus his hometown club.

Wedgewood stopped 28 shots during a 4-3 shootout loss at Buffalo on Jan. 30.

Teammate Mackenzie Blackwood has a 4.25 goals-against average while losing six straight starts since making 29 saves in a 4-3 overtime win at Buffalo on Feb. 25. That victory came after Blackwood allowed three goals each in losing his previous two 2021 starts against the Sabres.