PREVIEW: No. 2 Alabama looks to bring A game vs. Maryland 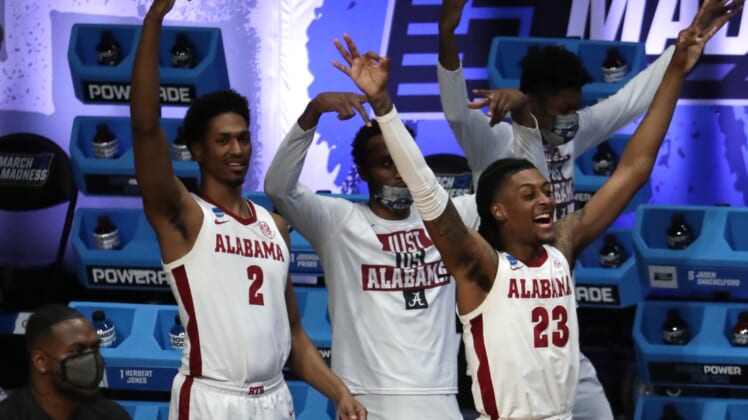 Alabama began the road to what it hopes will be a deep NCAA Tournament run by staving off a stiff challenge from a pesky opponent in Iona.

Now, the second-seeded Crimson Tide will seek their first appearance in the Sweet 16 since 2004 Monday when they play in Indianapolis to face Maryland, which is coming off an impressive defensive showing in the first round.

Alabama (25-6) will face one of the Big Ten’s top defensive teams after doing enough down the stretch in a 68-55 win over 15th-seeded Iona on Saturday afternoon. The Crimson Tide trailed six times but avoided the upset with an 11-0 run that was keyed by two 3-pointers from Alex Reese.

Jones scored 20 points while John Petty shot 3 of 13 and was held to 10 points as Alabama shot 54.2 percent in the second half, 47.2 percent overall and survived despite making just five 3-pointers.

“I thought our effort was great,” Alabama coach Nate Oats said. “Maybe we had some NCAA first-game jitters, I don’t know what it was to be honest with you, but hopefully getting that first game out of the way and getting a win even though we didn’t play well will help that.”

Alabama’s only trip to the Sweet 16 since 1991 was as an eighth seed in 2004 when it knocked off Stanford on the way to an Elite Eight trip. Its last appearance as a second seed occurred in 2002 when it took a 13-point loss to Kent State.

This time, the Crimson Tide are encountering a team who is rolling of late.

The Terrapins (17-13) entered the tournament by going 6-3 in their previous nine games. In a 63-54 win over UConn on Saturday, Maryland clamped down defensively by limiting the Huskies to 32.3 percent shooting from the field.

It was the 11th time this season the Terps held an opponent to under 60 points.

“Right now (the message) is enjoy this one. Are you kidding me?” said Maryland coach Mark Turgeon, who later added he views Alabama as a fifth No. 1 seed. “It’s so hard for us to win. We’re going to enjoy the heck out of this one.”

The Terrapins are hoping to replicate the stout defense while producing another efficient offensive showing in their bid to reach the Sweet 16 for the first time since 2016. Eric Ayala scored 23 points on 8 of 14 shooting as the Terrapins shot 51.2 percent and hit 9 of 18 3-pointers.

While Maryland lost 11 of 20 conference games, its wins include wins over No. 1 seed Illinois, Purdue, Wisconsin and Michigan State.

“It’s not really a shocker,” Ayala said. “We worked for it every day in practice, we came and competed. The Big Ten is obviously probably one of the best conferences in the country. And definitely prepared us for a game like this where we finally got to play somebody else.”