PREVIEW: No. 11 Syracuse, No. 3 West Virginia meet in clash of legends 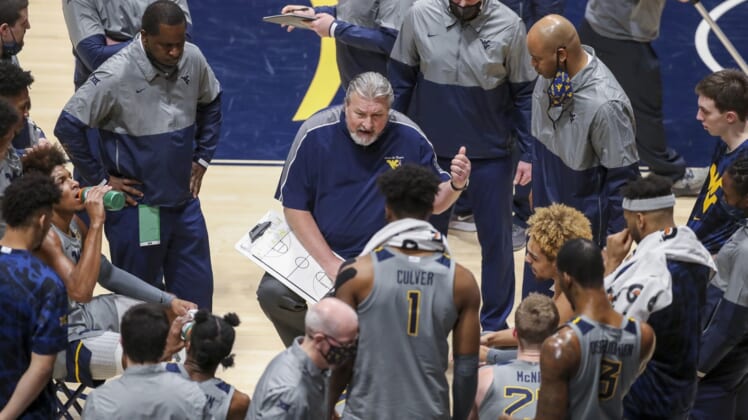 There won’t be a more iconic coaching matchup in the 2021 NCAA Tournament than when No. 3 seed West Virginia meets No. 11 Syracuse in a second-round Midwest Regional game in Indianapolis on Sunday.

The Mountaineers’ Bob Huggins is fresh off his 900th career victory, achieved with an 84-67 decision over 14th-seeded Morehead State on Friday.

Jim Boeheim officially has won 981 games over his 45 seasons at Syracuse, with 101 other victories vacated by the NCAA for violations, largely for tutoring.

They are two of only six coaches in Division I men’s college basketball to reach 900 wins.

“One of the best coaches in college basketball history,” Boeheim said of Huggins.

“And they’re a really good basketball team. They’re really the best West Virginia team I’ve seen. I’m not just trying to say that. They have really, really good shooting. They always play good defense. But they’ve got multiple guys that can shoot the ball, which I haven’t seen that much from them the last few years.”

When it comes to shooters and scorers, there might not be anyone hotter than Syracuse’s Buddy Boeheim, the coach’s son.

Miles “Deuce” McBride was equally as hot for West Virginia (19-9) on Friday night, scoring 30 in the 84-67 win over Morehead State. He leads a trio of high-volume guards who connect at better than 36 percent from behind the arc for the Mountaineers, who rank 10th nationally in adjusted offensive efficiency, according to KenPom.com.

“I thought he did a real good job defensively, picked a couple of balls loose that got runouts for us. We haven’t had a lot of those. We haven’t really pressed people to the point where we scored off of our defense.”

McBride and teammates hugged Huggins at the end of the game to celebrate the coach’s milestone.

“It means a lot, him being the first and only major D-I coach to offer me (a scholarship),” McBride said. “He really showed a lot of loyalty and a lot of trust that I was going to be a great player. Being able to be here for him to get the 900th means a lot.”

While West Virginia has gone to more of a four-guard look, Derek Culver (14.5 points, 9.7 rebounds) anchors the middle, which will be key at Bankers Life Fieldhouse against Syracuse’s famed 2-3 zone, which forced San Diego State into 35.8 percent shooting from the field — 27.5 percent (11 of 40) on 3-point tries.