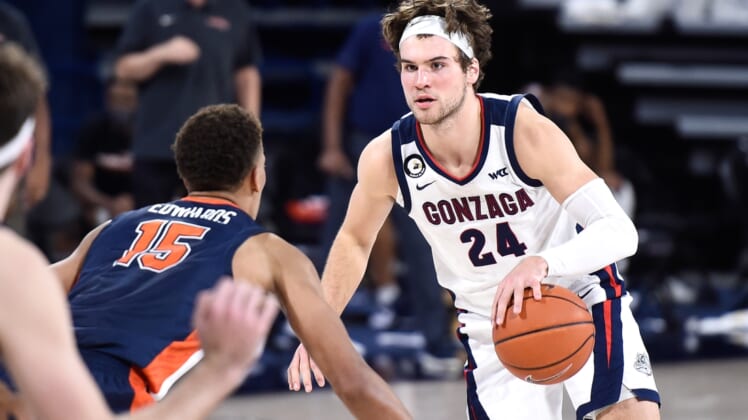 The top-ranked Gonzaga Bulldogs owns the nation’s longest home winning streak, but the atmosphere is noticeably different this season inside the McCarthey Athletic Center.

But having no wild and crazy fans inside “The Kennel” hasn’t derailed the Bulldogs as they take aim at their 47th consecutive home win on Saturday night when they face Pacific in West Coast Conference play at Spokane, Wash.

So, the easy wins and routs keep coming — the “closest” home outcome was 17 points — but Bulldogs star Corey Kispert said he feels the difference every single contest.

“Usually our stadium is full every night, fans screaming and yelling and the whole campus comes and is behind us,” Kispert told ESPNU. “They still are but you just don’t feel it as much. There’s not the same energy in the stadium, in the arena. … You can still feel it but it’s less tangible.”

Gonzaga routed Pepperdine 95-70 in its most recent home game on Jan. 14. The Bulldogs followed up with a 73-59 road win at Saint Mary’s two nights later.

Kispert scored 17 against the Gaels, marking just the second time in the past six games that he didn’t score at least 23. He averages a team-best 20.9 points and has been a stellar marksman from 3-point range, knocking down 48.9 percent (44 of 90) of his shots.

Joel Ayayi added 16 points on 8-of-13 shooting. But it wasn’t the usual Gonzaga runaway as it had to overcome a 10-point deficit before dispatching the Gaels.

“This was not a pretty game for us, and Saint Mary’s deserves a lot of credit for that,” Bulldogs coach Mark Few said. “They’re going to fight you and be tough and physical and the lane is going to be jammed up. They did a good job of taking the fight to us, especially in that first 10 minutes.”

The Zags don’t figure to encounter too much difficulty in trying to extend their home winning streak on Saturday.

Gonzaga is 17-1 all-time against Pacific and has won the past 15 meetings.

The Tigers (5-2, 2-1) were drilled 85-68 by Pepperdine on Thursday. Pacific trailed by as many as 35 points before whittling the deficit in half in the final portion of the contest.

Pierre Crockrell II scored a career-best 19 points on 7-of-8 shooting in a contest that got away at the outset.

Jordan Bell opened the game with a 3-pointer for the Tigers before Pepperdine erupted with a 21-2 burst.

Pacific coach Damon Stoudamire certainly will be guarding against another slow start against the powerful Bulldogs.

“They’re a really good team. They have multiple guys that are capable of getting 20-plus (points),” Stoudamire told WCC Hoops. “You can’t really focus on one. It’s amazing what they’ve been able to do so far this season. Obviously, we have our hands full. Our guys will come out and fight, fight, fight, fight and we’ll just see what happens.”

The Tigers have endured a tough season that has included two pauses due to the coronavirus pandemic. Pacific has had eight games canceled, four games postponed and went through a stretch in which it played one game in a 42-day span.

Stoudamire, the NBA Rookie of the Year for the 1995-96 season, has had to be more than a coach with this season’s challenges.

“It’s not about basketball right now for me,” Stoudamire said. “It’s really about their mental capacity is right. … I was really concerned. I know (the pauses) were mentally taxing on them. It was hard.”