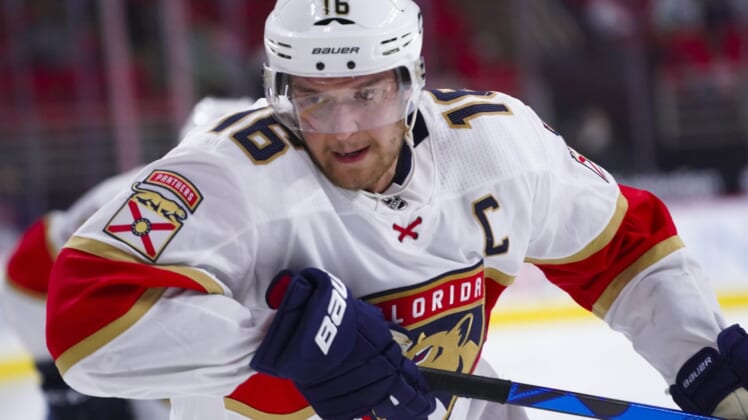 The Florida Panthers, who have the fewest in-regulation losses in the NHL this season, are set to play host to the Nashville Predators on Thursday night.

Last season, the Panthers were a disappointment. Counting overtime/shootout losses, they were a .500-type team (35-26-8), and their 78 points fell below Las Vegas’ over-under projection of 95.5. In the postseason, they did not make it past the qualifying round, losing 3-1 to the New York Islanders.

This season, the Panthers added forwards Patric Hornqvist, Carter Verhaeghe, Anthony Duclair and Alex Wennberg as well as the tone-setting hits of defenseman Radko Gudas. In addition, the young core players the Panthers already had are one year older and wiser.

“We’ve matured a lot,” said defenseman MacKenzie Weegar, a 27-year-old who has played his entire career with the Panthers. “We’re just a different team this year. We’ve got a veteran presence in the room, and we’ve taken a big step as a team.”

It helps to have captain Aleksander Barkov and Jonathan Huberdeau, who are tied for the Panthers lead in points with 34. Huberdeau leads the Panthers with 11 multi-point games and also with 24 assists. Barkov leads Florida in goals (12) and has two straight three-point games.

Weegar said he believes Barkov is “the best player in the world,” and fellow Panthers defenseman Aaron Ekblad had a similar statement following Monday’s 6-3 win over the Chicago Blackhawks.

“He leaves guys with their jaws hanging on the floor,” Ekblad said.

Goaltending is the other piece of the Panthers puzzle as Sergei Bobrovsky has gone on a tear with six straight wins. He has not lost in regulation over his past eight starts (7-0-1).

Nashville, meanwhile, is in the middle of an eight-game road trip, compiling a 2-2-1 record so far during this stretch.

The Predators snapped a three-game losing streak on Monday with an impressive 4-1 win over the Tampa Bay Lightning.

Nashville got 38 saves from Pekka Rinne as well as one goal and three assists from Calle Jarnkrok.

“Everybody knows we have been struggling,” Rinne said. “Considering Tampa Bay is one of the better teams in the league, this was a big win. It can give us energy and momentum going forward.”

Filip Forsberg, who has not missed a game this season, leads the Predators in goals (10) and assists (17).

Rinne is another key to Nashville’s game. The 38-year-old veteran is a four-time All-Star who won the Vezina Trophy in 2018 as the NHL’s best goalie.

“He’s a special person, the way he competes and goes about his business,” Predators coach John Hynes said. “His jersey number is going to be retired (in Nashville). He’s going to have a legacy with the Predators.

“It’s just really valuable to have him around our team, especially since we have so many young guys in the lineup.”