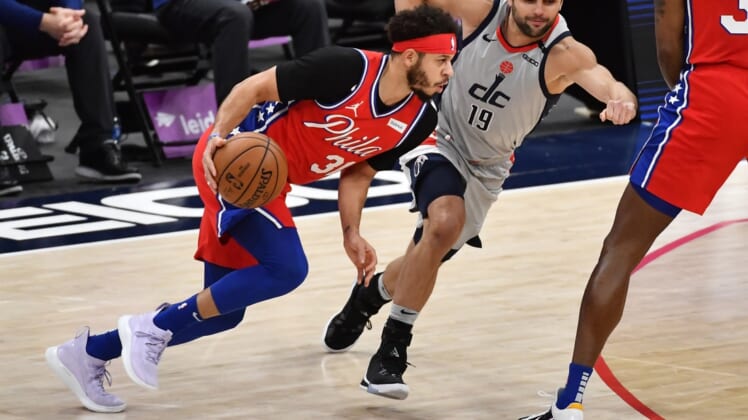 The New York Knicks climbed back to .500 Thursday night despite missing their top four options at point guard. Meanwhile, all the Philadelphia 76ers had to do to retain sole possession of first place in the Eastern Conference on Saturday night was win without three of their leading scorers.

Those teams hope to take the court at something closer to 100 percent on Sunday night, when the longtime rivals are scheduled to meet in New York.

The 76ers will be completing a back-to-back set after overcoming the absence of their trio of starters by cruising past the Sacramento Kings 129-105.

It was their seventh win in the last eight games, and they have a one-game lead over the Brooklyn Nets in the race for the top seed in the Eastern Conference. Beating the Kings at less than full strength inspires thoughts of what the Sixers can do when they’re fielding their optimal lineup.

The 76ers headed into Saturday knowing they’d be without leading scorer Joel Embiid — who entered ranked third in the NBA in scoring at 29.9 points per game and seventh in rebounding at 11.5 boards per game — as well as their fifth-leading scorer, Seth Curry.

Embiid missed his fourth straight game due to a left knee bruise, while Curry was sidelined with a sprained left ankle suffered in Wednesday’s 109-105 overtime loss to the Milwaukee Bucks.

But the 76ers also played without point guard Ben Simmons, who is battling a sore left knee and was listed as probable before being scratched. Simmons is averaging 15.9 points, 8.0 rebounds and 7.8 assists per game.

Despite the missing stars, Philadelphia never trailed against the Kings and led by as many as 36 points in the second half.

The Knicks’ point guard ranks have been battered by a variety of factors. Starter Elfrid Payton has missed the last four games due to a strained right hamstring, while Derrick Rose, acquired from the Detroit Pistons on Feb. 7 to provide some veteran experience for a youthful contender, has sat out the last seven games because of coronavirus protocols.

Rose could be cleared to return Sunday.

Rookie Immanuel Quickley, who has provided a spark off the bench for the Knicks before missing Thursday’s game with an injured left ankle, could also return Sunday. Austin Rivers, the son of Doc Rivers, is another option for New York, but he hasn’t played since Feb. 13 and recently returned home for the birth of his son.

Frank Ntilikina started at point guard Thursday and scored 12 of his 13 points in the second half as the Knicks improved to 21-21 and matched their win total from last season. New York, which hasn’t made the playoffs since 2013, enters Sunday in sixth place in the East.

“We have more than enough to win with, and we have guys that can play multiple positions,” Knicks head coach Tom Thibodeau said Thursday night. “When you’re called upon, get out there and play well.”