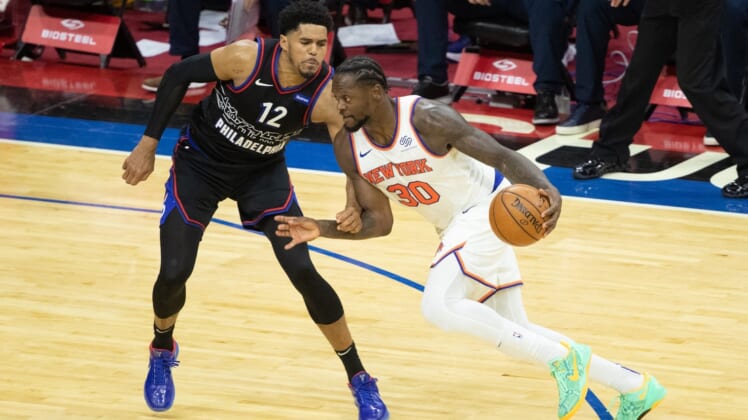 While the New York Knicks can accept some solace about engaging in tight games that went down to the final seconds against the two best teams in the Eastern Conference, they will keep feeling frustrated if they wind up discussing another tight defeat.

The Knicks try to shake off back-to-back losses against the Brooklyn Nets and Philadelphia 76ers Thursday night when they host the struggling Orlando Magic.

The Knicks are hoping to avoid falling two games under .500 for the first time since they were 15-17 following a 114-106 loss to the Golden State Warriors on Feb. 23. Before losing in Brooklyn and Philadelphia, the Knicks had won six of nine games.

“Taking a look at this game and the Brooklyn game, there’s a lot of good things to take from it,” New York coach Tom Thibodeau said. “Obviously, we fell short in the end. It shows us the work necessary to get over the hump. But the last two games you’re on the road against a Brooklyn and Philadelphia, and it comes down to the last possession.”

Julius Randle scored 33 points Monday when he also was called for a late traveling call before attempting a 3-pointer. On Tuesday, he scored 19 in 40:35 but also scored just one point after getting his shot blocked by Dwight Howard and crashing to the floor midway through the fourth quarter.

The Knicks engaged in tight games with elite foes while continuing to play short-handed. Derrick Rose (health and safety protocols) missed a sixth straight game while Elfrid Payton (hamstring) sat for the seventh time in nine games, and both could be out again Thursday.

The Magic are on their first eight-game skid since dropping nine straight from Dec. 8-26, 2017, but are at least getting some of their injured pieces back to the practice floor that could result in returns to game action.

Aaron Gordon and Evan Fournier returned to practice this week and could play Thursday.

Even if Fournier and Gordon return, the Magic are banking on another big night from two-time All-Star Nikola Vucevic, who is averaging 25 points and posted double-doubles in helping Orlando split the first two meetings with New York.

Vucevic has scored at least 24 points in his last seven games and was optimistic after scoring 38 points in Sunday’s 102-97 loss to Miami when the Magic committed a season-worst 23 turnovers.

“Being so short-handed for such a long time, having guys playing out of position and everything, for us to still bring it and play and compete every night, staying in games for the most part, I just told them to stay with it,” Vucevic said. “Hopefully, things will turn around for us soon and we’ll get some guys back. I was still proud of the effort the guys put in.”