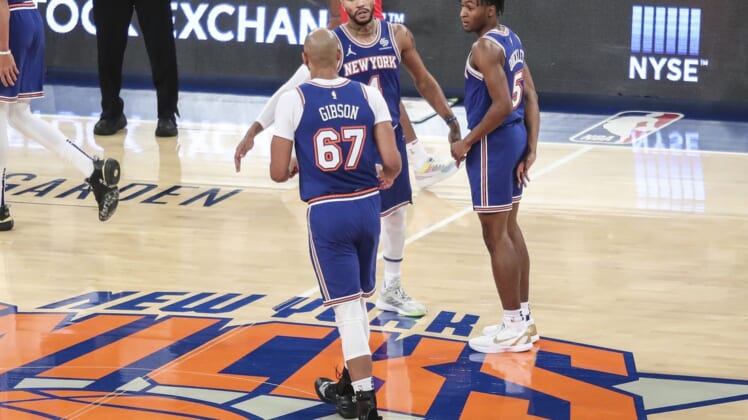 The New York Knicks dealt with their first significant injury of the season when starting center Mitchell Robinson broke his hand Friday night in Washington.

Their first game without him started off slowly on the defensive end but wound up producing a significantly positive result. The Knicks attempt to match a season high with a third straight win Monday night when they host the Atlanta Hawks.

Robinson is out after breaking the fourth metacarpal bone in his right hand that may require surgery. Robinson had started each of the first 27 games without fouling out and was averaging 8.4 points and 8.4 rebounds. Without him the Knicks struggled early before cruising to a 121-99 win over the Houston Rockets on Saturday.

On Saturday, the Knicks outscored the Rockets 60-44 in the paint, doing so after allowing 9-of-10 shooting inside during the first quarter. They wound up allowing under 100 points for the third straight game, ninth time overall and won for the fourth time in six games since going 1-5 from Jan. 22-Feb. 1.

“I thought the unselfishness was important and then we had a number of guys just step up and make shots,” Knicks coach Tom Thibodeau said. “But overall, the defense I thought was very, very good and so we have to count on that.”

Without Robinson, Nerlens Noel drew the start at center and was aided by veteran Taj Gibson off the bench. Noel played 32 minutes and scored 10 points while Gibson played 16 minutes as part of a reserve unit who combined for 58 points.

On Saturday, Noel started against DeMarcus Cousins and this time, he will start against Clint Capela, who is averaging a career-high 13.9 rebounds. Capela posted a double-double with 24 points and 10 rebounds but the Hawks dropped a 125-113 decision to the Indiana Pacers on Saturday when Trae Young was held to 15 points, his third-lowest total of the season.

Atlanta enters Monday’s visit to New York on a three-game losing streak and with six losses in the last seven games since a 16-point win at Washington on Jan. 29. The Hawks allowed at least 120 points in four of those games and Saturday were outscored 41-26 in the fourth quarter.