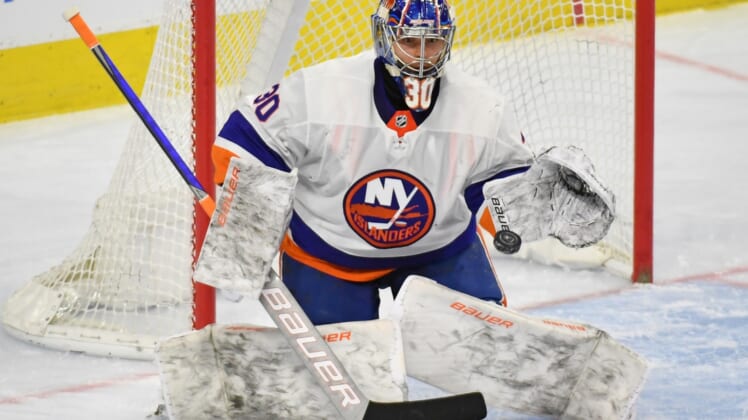 A winless five-game road trip isn’t ideal at any time, but enduring it during the first month of a normal regular season is usually the least worst outcome.

Of course, there’s nothing normal about a pandemic-shortened regular season consisting entirely of divisional games, which means, to paraphrase Yogi Berra, it’s already getting late early for the New York Islanders.

The Islanders will hope to snap their winless streak Tuesday night, when they are scheduled to host the Buffalo Sabres in the opener of a three-game homestand in Uniondale, N.Y.

Both teams were off Monday after losing Sunday, when the Islanders ended their road trip with a 4-3 overtime loss to the Philadelphia Flyers and the Sabres fell to the visiting New Jersey Devils, 5-3.

Getting the point provided some short-term solace for the Islanders, who managed to double their point total for the trip by overcoming a two-goal third period deficit to force overtime.

“We’re sitting there after two periods and (with) the way the week has gone, we could’ve just said ‘Let’s get out of here’ and give up,” Islanders head coach Barry Trotz said. “We didn’t. We battled back. I thought they uplifted each other. I felt we were going to get two points. I really did.”

Still, an 0-3-2 trip put the Islanders into an early hole — entering Monday, they were seventh in the East Division, three points behind the fourth-place Pittsburgh Penguins — and made it clear they need to begin playing complete games sooner than later. New York squandered a three-goal lead in a 6-3 loss to the Washington Capitals on Thursday and had to overcome a multi-goal deficit to force overtime in Saturday’s 3-2 loss to the Flyers.

“When we’re successful, we see how we’re playing well and we need to translate that to a full 60 minutes,” Islanders defenseman Nick Leddy said Sunday night.

The Sabres will also be searching for some consistency Tuesday. The loss to the Devils snapped a five-game point streak for Buffalo, which produced its only set of back-to-back wins during the 3-0-2 stretch.

On Sunday, the Sabres fell behind 2-0 by giving up first- and last-minute goals in the first period. Goals late in the second by Curtis Lazar and Rasmus Dahlin had Buffalo on the verge of hitting the intermission in a tie game, but Miles Wood scored for the Devils by putting back his own rebound with a second left in the period.

The Sabres tied the score again when Rasmus Ristolainen scored on the power play 3:53 into the third before Michael McLeod put the Devils ahead for good just beyond the midway point.

“I don’t think we were working smart within the framework we want to work in,” Sabres head coach Ralph Krueger said. “I wouldn’t say we didn’t work. I thought the guys worked hard to get us back from down (2-0) and then down 3-2 again with the late, painful goal.”