PREVIEW: New Orleans Pelicans look to clamp down on Pistons in Detroit 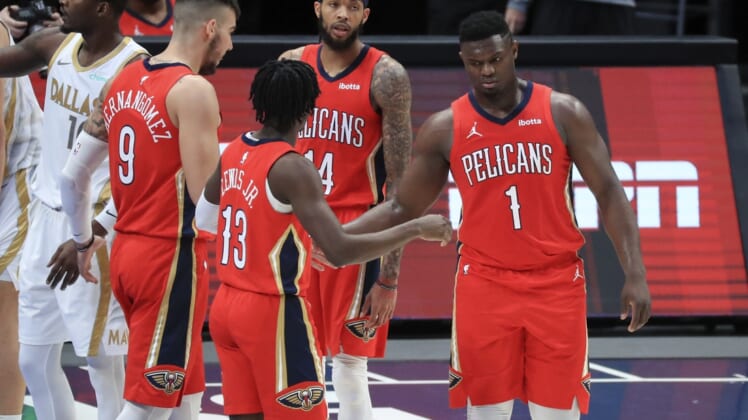 Stan Van Gundy feels embarrassed by his team’s defense. He hopes for a better effort against the team he used to coach.

Van Gundy’s New Orleans Pelicans have surrendered 25 3-point makes in each of their last two games, setting an NBA record that no team wants. The Pelicans will try to guard the arc with a little more purpose in Detroit when they face the Pistons on Sunday.

Chicago shot 59.3 percent from the field and made 25 of 47 3-point attempts while defeating New Orleans 129-116 on Wednesday. Dallas did the shredding on Friday, shooting 58 percent overall while draining 25 of 45 long balls to overwhelm the Pelicans 143-130.

“Our defense is ridiculous. We tried everything (Friday),” Van Gundy said. “I don’t know. It’s on us as coaches to figure out the best scheme. It’s on our players to play a lot harder and get to closeouts. To have two games in a row like this is inexcusable. For me as a coach and for the players, it’s inexcusable.”

Prior to the many lapses, the Pelicans had shown signs of growth while reeling off four consecutive victories, capped by a 130-101 thrashing of Houston on Tuesday.

“We’ve got to find something and get good at it,” Van Gundy said of the defense. “We’re not, and it’s frustrating. I’m not sitting here pointing fingers. A large part of it’s on me. But a large part of it is on (players), too.”

Van Gundy expressed similar frustrations coaching the Pistons for four seasons from 2014-18. They had three losing seasons and only made one postseason appearance.

Offensively, the Pelicans’ franchise player has become the force expected from the No. 1 pick in the 2019 draft.

Zion Williamson followed up a 29-point output against the Bulls with a career-high 36 points against the Mavericks. Williamson only missed one of his 15 field-goal attempts.

It went to waste because the Pelicans couldn’t get stops.

“They moved the ball well and hit a lot of tough shots,” Williamson said. “When shots are going in like that and teams are moving the ball as well as they are, it’s tough to find defensive schemes sometimes in that moment.”

The Pistons enter on a high note after winning at Boston on Friday, 108-102, despite a depleted frontcourt. Starting center Mason Plumlee missed his second straight game with bursitis in his right elbow and reserve forward Sekou Doumbouya was diagnosed with a concussion.

Rookie Saddiq Bey came to the rescue with a career-high 30 points. He made all seven of his 3-point attempts — a franchise rookie record –and grabbed 12 rebounds.

“He’s a competitor. He’s a special competitor,” coach Dwane Casey said. “He didn’t lose confidence and he stayed with it. Once he gets his feet set, he’s one of those guys, you feel good when he lets it go. He believes in himself. We believe in him. He’s just scratching the surface. I told him after the game — stay hungry, stay humble.”

Detroit has a modest goal on Sunday. Back-to-back victories classifies as a humble winning streak but the Pistons haven’t been able to achieve that since mid-January of last season, when they downed Boston and Atlanta.