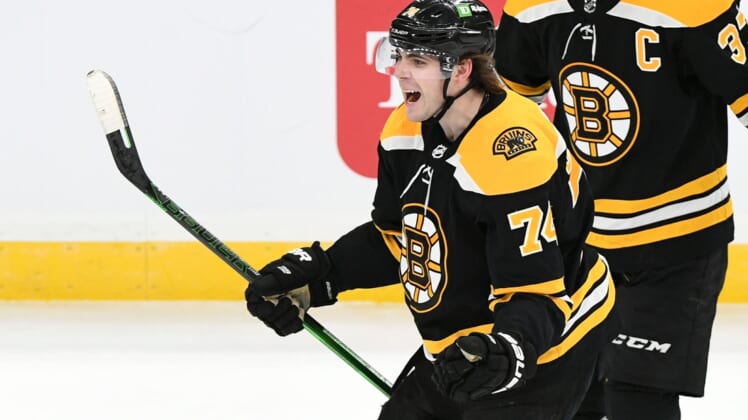 The New Jersey Devils’ first game in 16 days began with a fight and ended with a three-goal third period. But the chaos might really begin Thursday night, when the Devils are scheduled to visit the Boston Bruins.

The Devils returned to action Tuesday following a coronavirus pause by beating the host New York Rangers 5-2. The Bruins haven’t played since Saturday, when their 10-game point streak ended with a 4-2 loss to the New York Islanders in Uniondale, N.Y.

Nineteen Devils players were placed on the NHL’s COVID-19 protocol list and at least eight players — including goalie Mackenzie Blackwood, who was the first New Jersey player placed on the COVID-19 list Jan. 21 — battled the coronavirus between a 5-3 win over the Buffalo Sabres on Jan. 31 and Tuesday’s victory.

The Devils still had four players on the COVID-19 list Tuesday night but never trailed the Rangers, who played five games while New Jersey was paused.

Devils center Michael McLeod and Rangers left winger Chris Kreider fought 29 seconds into the first period after McLeod leveled Mika Zibanejad at the benches. The teams scored twice apiece in the second before New Jersey produced a three-goal flurry in the final 10 minutes of the third.

“We talked in length about the opportunity we had, that we had lots of excuses for maybe not playing well, and I told the team we’ve got to find a reason to win,” Devils head coach Lindy Ruff said Tuesday night. “We came out well and played a strong game, a very tight game.”

Now the Devils just need to do it — again and again and again. The game against the Rangers marked the start of an 83-day span in which New Jersey is scheduled to play 47 games.

On Thursday, the Devils face the well-rested Bruins, who are unlikely to be in a very good mood after absorbing just their second regulation loss of the season Saturday. Boston is 0-2-0 against the Islanders and 10-0-2 against everyone else.

The Bruins entered Wednesday with the most points in the Eastern Conference, but their fast start has come in spite of a sputtering offense. Boston has scored 12 of its 42 goals via the power play but is 0-for-10 in power-play chances the past four games, a span in which it has scored just eight goals overall.

The four days off between games allowed head coach Bruce Cassidy to tinker with the Bruins’ lines. During practice Monday, Cassidy placed Jake DeBrusk on the top line in place of David Pastrnak, who skated on the second line.

Pastrnak is tied for second on the Bruins with three even-strength goals and tied for fourth with 10 points, but Cassidy said he hoped the shuffling would have a trickle-down effect. DeBrusk has yet to score in nine games after collecting 19 goals in 65 regular-season games last year.

“Hopefully it jump-starts both lines,” Cassidy said. “Maybe this gets both lines scoring consistently.”