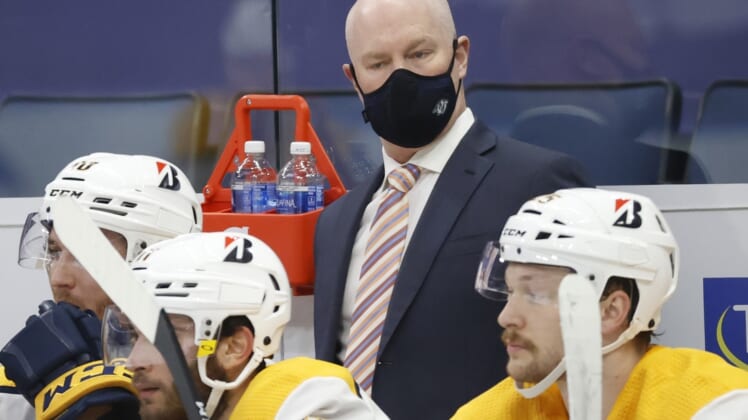 The Nashville Predators hadn’t slept in their own beds since the first week of the month. They’re glad their postseason aspirations haven’t been put to rest.

The Predators collected four wins and an overtime loss in an eight-game trip. They’re 14-17-1 overall and still in contention for a playoff berth in the Central Division.

Nashville will play its first home game since March 6 when it hosts Detroit on Tuesday night. The teams will meet again in Nashville on Thursday night.

The Predators’ long journey concluded with a 4-3 shootout victory in Dallas on Sunday.

“It was a real strong road trip,” coach John Hynes said. “We played a lot of good hockey; we had contributions from everyone that was on the trip.”

Hynes’ club was shut out by Florida 2-0 the previous day. The coach said he was pleased with the grit his team showed Sunday on the final game of the trip.

“After the 16th day on the road, in the eighth game, and coming into a back-to-back, just really happy with the way that our guys stuck with it,” he said. “The focus level was something we addressed with our team (Sunday). We (couldn’t) be thinking about going home, so a really good stretch for our group. It’s nice to get home, nice to get the win and then come back and be ready to go.”

Nashville’s 21-year-old wing, Eeli Tolvanen, scored his fourth goal of the month and also notched two assists for the first three-point game of his NHL career. Calle Jarnkrok had the decisive score in the shootout.

“This was a make-or-break trip for us,” center Ryan Johansen said. “We had to find a way to get points and win some games, and then we did that.”

This will be the fifth of eight meetings between the Predators and Red Wings this season; they split the first four. In the most recent meeting, on Feb. 25, Detroit forward Sam Gagner had a hat trick to lead his club to a 5-2 victory.

Wings forward Robby Fabbri recorded a hat trick Thursday in a 3-2 win over Dallas, but Detroit was blanked 3-0 by the Stars on Saturday.

“Everything they got, we gave to them,” center Dylan Larkin said. “For a long part of that game, it was 0-0 and not much was going on. A lot of interference, and not a lot of open lanes, close checking. We gave them what they got, and they didn’t give us much.”

The game on Tuesday night begins a stretch in which the Wings play six of eight games on the road.

Coach Jeff Blashill said he sees signs of defensive improvement. Detroit has won three of its past five games. The other loss during that stretch was 2-1 to Carolina.

“What we’re trying to do here is learn how to be a good defensive team,” Blashill said. “Protecting the critical part of the ice, making sure we’re above people, making it hard for opponents to get to our net. We haven’t been perfect at it, but we’re trying to build it and ultimately, if you do that, you’re in every game and you learn how to win those close games.”