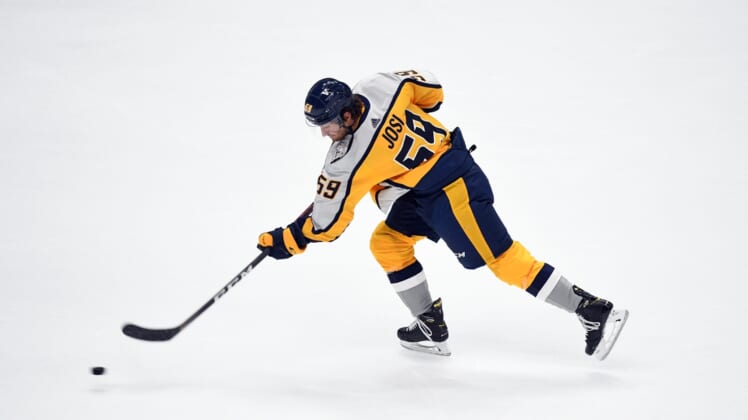 The Nashville Predators will try to extend their season-high four-game winning streak when they visit the Chicago Blackhawks on Sunday night to complete a weekend series.

Nashville is coming off a 3-1 win over the Blackhawks one night earlier. Ryan Johansen, Rocco Grimaldi and Mikael Granlund each scored as the Predators pulled within two points of Chicago for fourth place in the Central Division standings.

It has been a good week for Nashville, which has outscored opponents 16-5 during its winning streak.

“Our consistency has been so much better,” Predators captain Roman Josi said. “It seems like everyone is playing their role, everyone wants to win for the team. We’re playing as a team. Everyone’s doing their job. So I think just our team game is a lot more solid now, and it shows on the scoresheet.”

Nashville’s latest win came despite the absence of Filip Forsberg, who leads the team in goals (11) and points (29). Forsberg sat out the first game against the Blackhawks because of an upper-body injury, and his status is day-to-day.

As the Predators wait to learn whether Forsberg can return Sunday, the Blackhawks look forward to the continued presence of one of their young standouts. Kirby Dach made his season debut Saturday after missing several months with a broken wrist.

“It felt good,” Dach said. “Obviously, there are still some things that I’d like to get better at, but that doesn’t include what’s going on with my wrist and injury wise. I felt good out there. It’s good to get back in the swing of things. I think there’s still another level that I can take my game to (so I can) help the team win here.”

Chicago will try to bounce back after sustaining its first loss in three games. The Blackhawks are looking to make more of an impact on offense after scoring three goals or fewer in each of their past seven contests.

Blackhawks coach Jeremy Colliton is looking for a more complete effort from his players in the finale of the weekend series.

“We can play much better,” Colliton said after Saturday’s loss. “I thought we got better as the game went on. The second and third (periods were) closer to at least the work ethic that we want to have. The execution wasn’t quite there either, but I thought they were better than us (Saturday). The good news for us is we get a chance to come back (Sunday) and respond.”

Kevin Lankinen allowed three goals on 34 shots to take the loss for the Blackhawks on Saturday. Colliton could give Lankinen a rest on the second night of a back-to-back set by turning to Malcolm Subban, who is 4-4-1 with a 3.14 goals-against average and .903 save percentage in nine starts this season.