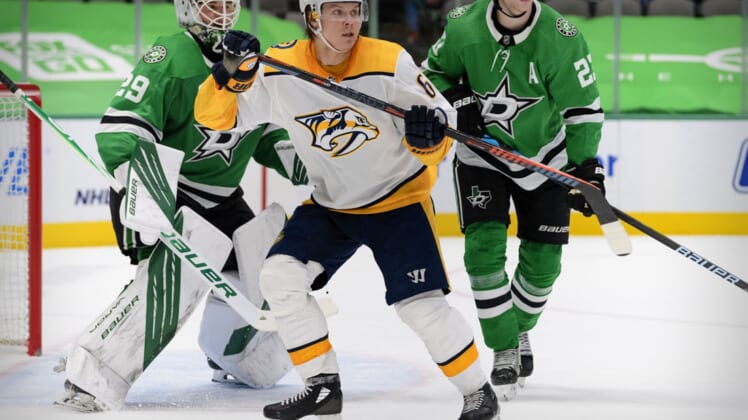 The Nashville Predators began their season-high eight-game road trip with a spirited 4-3 victory over the Dallas Stars on March 7.

The Predators saw that momentum come to an abrupt halt with losses in four of their next six contests (2-3-1). Nashville will look to get back on track in the finale of its lengthy trek against the Stars on Sunday night.

Juuse Saros followed up a 40-save performance in the Predators’ 2-1 win over Florida on Thursday by stopping a career high-tying 47 shots two days later in a 2-0 setback to the Panthers.

“(Juuse) was fantastic,” Nashville coach John Hynes said following Saturday’s setback. “He kept us in the game. We just couldn’t find a way to get one.”

The lack of offense has been an all-too-common theme for the Predators, who have been shut out on three occasions this season after being blanked just twice in 2019-20.

“You’re going to look at the shutout, and you’re going to say: ‘(We couldn’t get) things going offensively,'” Hynes said. “But to be honest with you, we couldn’t get out of our own zone. We couldn’t execute the passes coming out of our own zone, we didn’t get through the neutral zone with any type of speed or strong puck decisions and there were a lot of turnovers in those areas that didn’t even allow us to be able to get on the attack as much as we had been in past games on this trip.”

Saros was gouged for five goals on 20 shots before being lifted in a 7-0 setback to Dallas on Jan. 22. He yielded three goals to the Stars two nights later in a 3-2 setback to fall to 6-2-1 in nine career meetings with Dallas.

Fellow Finn Pekka Rinne made 35 saves in the Predators’ victory over the Stars on March 7. He sports a 17-13-2 record with four shutouts in 35 career encounters with Dallas.

Anton Khudobin recorded his third shutout of the season on Saturday, courtesy of a 21-save performance in the Stars’ 3-0 victory over the Detroit Red Wings. Khudobin turned aside 49 of 51 shots to win the first two meetings with Nashville this season, improving to 6-4-1 with a 2.18 goals-against average in 13 career appearances versus the Predators.

Should Khudobin receive a breather, Jake Oettinger would be in line to make his second career start versus Nashville. He turned aside 17 shots on March 7, however he permitted goals to Filip Forsberg and captain Roman Josi in the shootout on March 7.

Defenseman Andrej Sekera scored his second goal in five games and Tanner Kero tallied for the first time in more than three years for Dallas, which has collected at least a point in seven of its last nine contests (4-2-3).

Joe Pavelski, who leads the team in goals (14) and points (27), has four and eight, respectively, against Nashville this season.