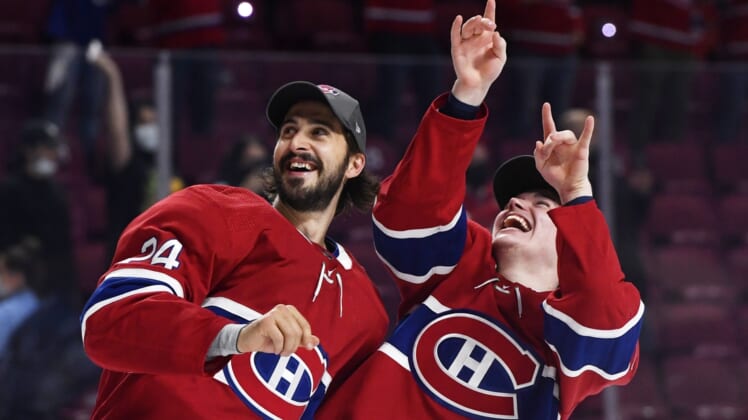 The Montreal Canadiens have a shot at their NHL record 25th Stanley Cup crown. All they must do is upset the Tampa Bay Lightning in the series that kicks off Monday in Florida.

Beating the heavily favored Lightning — the defending champions — would be a monumental achievement, but the Canadiens are used to serving upsets. They have already knocked out the Toronto Maple Leafs, Winnipeg Jets and Vegas Golden Knights en route to the Final, and defied the oddsmakers at every turn.

“We believe that we aren’t the underdog,” said assistant coach Luke Richardson, the acting head coach while Dominique Ducharme is in the league’s COVID-19 protocol. “We’re very confident in ourselves and what we’ve accomplished. We don’t really use it as a motivation to prove people wrong, but … you want to show people that we belong more than they’re wrong.”

The Canadiens, the most storied franchise in hockey, last won the title in 1993, which happens to be the last time a Canadian-based team won the Cup, and had more turmoil sent their way on the eve of the series. Ducharme remains away from the team after testing positive for COVID-19 midway through the previous series against Vegas, which will keep him from being behind the bench until Game 3.

Unfortunately on Sunday forward Joel Armia was also placed in the protocol for the start of the series.

“It’s something we’ve kind of been dealing with all year, guys going out through the COVID protocol,” defenseman Ben Chiarot said. “Armie’s obviously an important player for us. It’s just another little piece of adversity.”

Jake Evans is likely to play for the first time since suffering a concussion in the opening game of the Winnipeg series.

The Canadiens believe they have the team to unseat the champions, especially with goaltender Carey Price back in top form, with a 12-5 record with a 2.02 goals-against average, .934 save percentage and one shutout in the playoffs.

“Whether you’re up in the game or down in the game, he’s always calm and collected,” defenseman Jeff Petry said. “If it’s a tough stretch in the game, he’s making saves and making them look effortless. It goes a long way. Knowing you have a guy like that behind you, it’s something special.”

The Lightning are considered more of an offensively gifted team, but believe their goaltender, Andrei Vasilevskiy, doesn’t take a back seat to anybody. Vasilevskiy, a finalist for the Vezina Trophy as the league’s top goaltender in four consecutive seasons, and the winner in 2019, has a 12-6 record with a 1.99 GAA, .936 save percentage and four shutouts this postseason.

He was voted by nearly 500 players as the league’s best goalie in a recent poll by the NHLPA.

“In order to be successful in this league, it always has to start with the goaltender,” captain Steven Stamkos said. “Just look at the two teams in the Final this year. For sure, Vasy is our rock.”

While debates can rage which side has the edge between the pipes, there is no doubt the Lightning have the upper hand in winning experience.

“It’s going to be a huge challenge, and that’s where we go back to all the times that we’ve been in this situation,” Stamkos said. “This core now. … there’s guys that this is their third final, so we just go back on past experiences and go from there.”

“For us, they’re a roadblock,” Lightning coach Jon Cooper added. “And we’re a determined group to go in there and see another team we haven’t played. But it’s clear by watching them on TV how good they are and how they’ve got their mojo going and led by their goaltender. It’s going to be a fun series.”