Minnesota’s Ian Cole has had his name engraved on the Stanley Cup twice as a member of the Pittsburgh Penguins in 2016 and 2017, so the veteran Wild defenseman knows all about the twists and turns a playoff series can take.

Minnesota held on for a 4-2 elimination-game victory over the Vegas Golden Knights on Monday at Las Vegas to force a Game 6 on Wednesday night at Saint Paul, Minn. After the victory, Cole cautioned that there still is a long way to go for the Wild, who trail the best-of-seven series, 3-2.

“We’re not going to start dreaming about winning the series until we get it done, but this was a great first step in that process,” Cole said. “Coming here, to a tough barn to win in, they came out hard obviously and we were able to handle it and were able to survive.”

Minnesota built a 3-1 lead in Game 5 on the first-period goals by star rookie Kirill Kaprizov, as well as Zach Parise and Jordan Greenway. The Wild held on despite a second period that saw Vegas finish with an eye-popping 40-3 edge in shot attempts and 22-1 advantage in shots on goal. 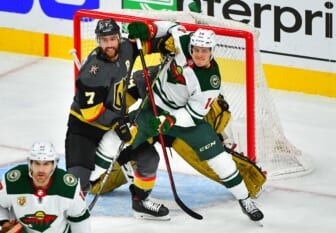 Vegas’ Alec Martinez cut it to 3-2 midway through the second with his first goal of these playoffs, but the Wild managed to hold on down the stretch behind 38 saves by Cam Talbot. Nico Sturm sealed the victory on an empty-net goal with 39 seconds to go.

“It’s the first step in a very long process, a very long journey to get this done,” Cole said. “We’ve just got to keep going. We can’t rest on our laurels here. The series isn’t over and we’ve got to win Game 6.”

Minnesota had scored just four goals in the first four games against Vegas goaltender Marc-Andre Fleury before scoring three times in a 7 1/2-minute span in the first period on Monday.

“Hopefully it’s something that we can feel good about,” said Parise, who banked in a rebound off Fleury’s back for the go-ahead goal. “I think Fleury has played really well for them all series, and for us to get three past him in the first, (it) at least makes us feel good about heading back home to a place we’ve played well.”

Said Wild coach Dean Evason: “We talked before the game that once those breaks come our way, we hope that it’ll keep snowballing into that great big ball, that we can use this momentum to go forward.”

Minnesota had gone 19-2-2 in its previous 23 home games before Vegas won 5-2 in Game 3, after never winning a regulation game at Minnesota. The Knights followed with a 4-0 victory in Game 4.

“We knew this wasn’t going to be easy coming in,” Golden Knights coach Peter DeBoer said. “If anybody had said at the start of the series we’re going to give you an opportunity to go into Minnesota in Game 6 and win the series, and Game 7 is going to be at home, we would’ve taken that.

“It’s basically down to two games, and we’ve got to find a way to win one of them.”