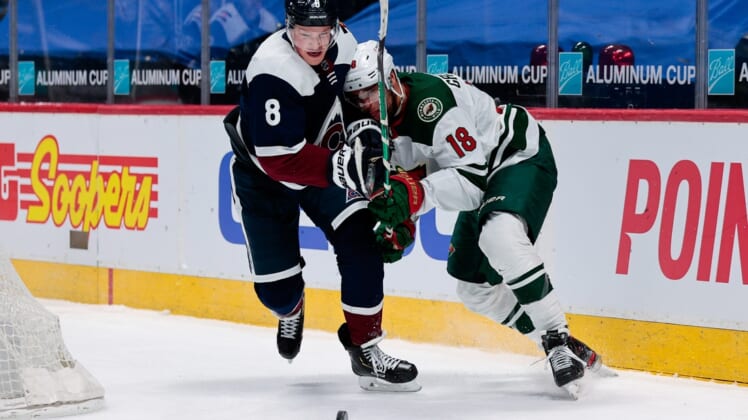 The Minnesota Wild are set to resume their season at the Los Angeles Kings on Tuesday night.

Getting back to normal following a two-week shutdown will likely take more time, however.

The Wild departed Minneapolis on Monday afternoon without a sizable chunk of their roster.

On the positive side, right wing Mats Zuccarello is set to make his season debut after undergoing offseason arm surgery.

The Wild are also hoping to get back defenseman Jared Spurgeon (upper-body injury) and Matt Dumba (lower-body injury), while 20-year-old defenseman Calen Addison is set to make his NHL debut on Tuesday.

“This is really a lifelong dream come true,” Addison said. “I’ve waited almost 21 years for this. For it to come true and for that to be happening tomorrow is something special. I’m thankful they believe in me enough to put me in and give me that chance.”

Marcus Johansson is also expected to return to his center spot for Minnesota after missing two games with an upper-body injury and then going on the COVID-19 list.

“First few days, I was pretty sick, maybe three days or so,” Johansson said. “But then it’s been better and better, and slowly getting back. It’s basically been like a flu, but you kind of have a little more respect for it. But just being sick with fever and all that, it’s never fun. But it wasn’t too bad.”

The Kings also had two forwards recently emerge from COVID-19 protocol, Blake Lizotte and Andreas Athanasiou, who were cleared to resume skating over the weekend for the first time since late January.

Los Angeles has been off since Thursday. The Kings were scheduled to host the Wild on Saturday, but Minnesota was still shut down by the NHL.

Matt Luff returned to Kings on Thursday against the San Jose Sharks after missing nearly a month with an undisclosed injury.

He said he learned a lot from watching the Kings play from high above the ice at Staples Center.

“You see how things develop and watch how plays come about,” he said. “Watching the game up top, seeing how I have more time than I think, versus making a quick play, you just get to see it from a different perspective.”

The Wild are hoping left wing Jordan Greenway can pick up where he left off two weeks ago.

“He’s taken a big step forward, not only with his game on the ice but off the ice as well, becoming an everyday pro hockey player,” Wild coach Dean Evason said. “It’s a good challenge for him and for everybody, clearly, after the break to recharge and get the motor going again obviously for Tuesday. But what he’s shown us so far up to this point has been mature off the ice, a real sound game on the ice, and he’s been rewarded for it. We expect him to continue Tuesday night when the puck’s dropped.”