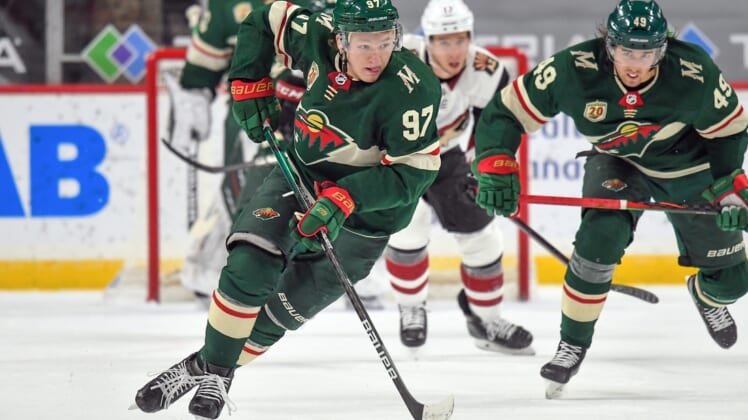 The Minnesota Wild can match the franchise record for the longest home winning streak when it tries to complete a three-game home sweep of the Arizona Coyotes on Tuesday night in Saint Paul, Minn.

The Wild have won seven in a row at the Xcel Energy Center since a 5-1 loss to Colorado on Jan. 30. The team record is eight consecutive home wins accomplished three times, including twice during the 2006-07 season and most recently in 2016-17.

Tuesday night’s game will complete a five-game Minnesota homestand that began with an impressive back-to-back sweep of West Division-leading Vegas.

The Wild pulled away for a 4-1 victory Sunday afternoon, with Kevin Fiala highlighting a three-goal Minnesota third period with a goal and an assist and Talbot stopping 21 of 22 shots in the game.

Minnesota coach Dean Evason said his team has found ways to grind out wins during the longest active home winning streak in the league.

“I spoke of like how grindy the games have been obviously since accentuated by the Vegas games, how grindy they were, and how good the teams are in this league is that every night it’s a grind,” Evason said. “The game (Sunday) was hanging in the balance for a long time. It was there for either team if you caught a break or a bounce.”

“It wasn’t a pretty game, but the most important thing is that we stick together,” Fiala said. “We have a belief in the room that we are going to win. It doesn’t matter what happens. We have done it a lot of times this season. It’s just a great feeling. You kind of feel that we’re knowing that we win.”

Arizona, which enters Tuesday’s game tied for fifth place in the West Division with Los Angeles, hit the halfway mark of the 56-game schedule at. 500 (12-12-4) and is 1-2-1 on its current seven-game trip, which concludes with a Thursday-Saturday back-to-back against last-place Anaheim.

Both of the first two games with Minnesota were tied heading into the third period. The Wild scored four goals in the final 20 minutes in the opener and followed that with three scores in the third period in Sunday’s win.

“It’s twice now where it’s a tie game late,” said Arizona coach Rick Tocchet. “With about 14 minutes left, they’re getting the big moment and they’re scoring. Teams are scoring at the right time, we’re not; that’s really what it comes down to. Maybe a month ago we were getting the big goals at the right time; we’re not doing it now. And we’re not defending that well to make up for that sort of stuff.

“We’ve lost two in a row here,” forward Christian Dvorak added. “Just take it a game at a time. We definitely don’t want to get swept in Minnesota. So we’ve got to treat this next game as a huge game for us and bring the best effort we can.”