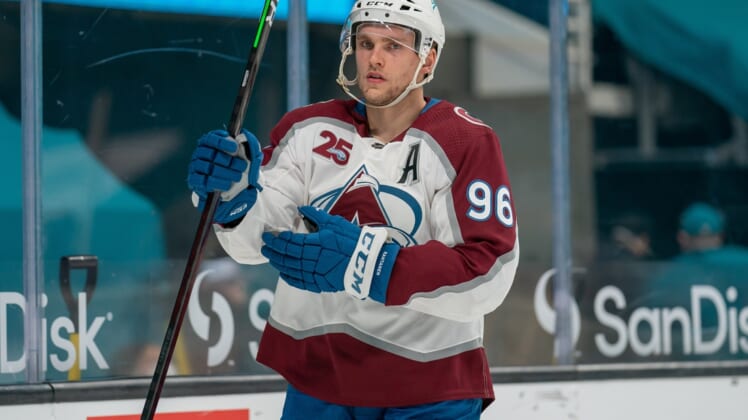 Thursday night’s game between the Minnesota Wild and Colorado Avalanche was considered a measuring stick for two streaking teams.

Minnesota came up short in that regard, but it gets a do-over when the teams meet Saturday afternoon in Denver.

Colorado swarmed the Wild from the start with 25 shots in the first period Thursday night and 55 for the game. Minnesota couldn’t even match the first-period total for the game, putting just 20 shots on Philipp Grubauer in a 5-1 loss.

The bigger loss might be the injury to defenseman Matt Dumba. He left in the second period with what looked like a serious right leg injury after sliding skates first into the boards. The Wild didn’t have an update after the game, but coach Dean Evason didn’t sound optimistic.

The Wild were already missing defenseman Carson Soucy, who was serving a one-game suspension for his hit in Tuesday’s win over Arizona. He will be available Saturday, but it will be hard to replace someone such as Dumba.

Being better was the overall theme for Minnesota after being dominated by Colorado, which jumped over the Wild in the West Division with the win. The top line was particularly potent, accounting for four goals and 10 points.

Mikko Rantanen had four points (two goals, two assists) and Nathan MacKinnon and Gabriel Landeskog had a goal and two assists each.

As satisfying as the win was for the Avalanche, they know the next game is just as important.

“We wanted to leapfrog them,” MacKinnon said. “They can leapfrog us Saturday, so we need to bring our desperation again. Our division’s very tight, and we’re trying to separate ourselves. We’re getting healthy finally, and hopefully in the second half of the year, we’ll get lots of wins.”

Colorado got a boost from the return of young defensemen Cale Makar and Bo Byram. Both had missed multiple games with upper-body injuries and their return gave the Avalanche much-needed depth at the blue line.

Grubauer will likely be in net again after his 19-save performance, but his backup has changed. Colorado sent Hunter Miska to the Colorado Eagles of the American Hockey League and recalled Adam Werner. Miska struggled in his last two starts and was pulled in Tuesday’s 8-4 win over Anaheim after allowing four goals on seven shots in the first period.

Grubauer has faced just 35 shots over the past five periods, 20 fewer than Cam Talbot had thrown at him on Thursday night. His teammates absolved him of any blame for Thursday.

“He couldn’t do anything on those goals,” Wild defenseman Jonas Brodin said. “The five guys in front of him weren’t that good. It (stinks). He’s been so good … and then the guys just let him down.”